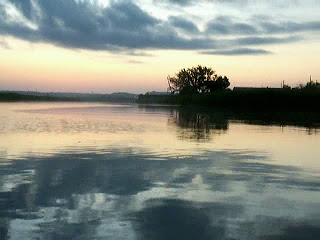 FRANCES: I was so relieved today that we actually were able to go kayaking. We have been in a weather pattern of morning and afternoon thunderstorms which have prevented our trips for several weeks.

Today we were on the water before sunrise and the water was as smooth as glass, perfectly reflecting the clouds in the water below. The sunrise would have been the most peaceful and beautiful thing, with the orange sun marking the spot between the clouds in the sky and clouds reflected on the water. That is, except for the air boat which came buzzing through the middle of it all just as the sun crested over the trees.

I remember wondering how these young men could set their boat away from the gorgeous sunrise and the beauty and wonder behind them. The thought still amazes me. It made me think then of how we so often run from the Lord and His mercy and grace, when it is so obvious we should only and always run to Him.

The wake of the airboat did make some very interesting undulations in the water, causing reflections which I would not have seen otherwise. So even though I was at first tempted to be 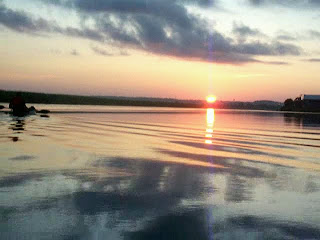 irritated by the young men and their boat for disturbing the peace and calm of that blissful scene, I ended up being pleased with the beauty their interruption provided.

By the time we made it out of Chacaloochee Bay and reached Apalachee River, the sun was already well risen. We decided to head south with the river and follow it into Mobile Bay. Our intent was to follow the eastern shoreline along until we were ready to turn back, but as is often the case, our plans are not God's plans.

We crossed under the bridge from the Causeway and headed toward the bridges from the Bayway. I wondered about all the cars and trucks speeding along on the interstate, looking out at the two of us on our little kayaks on the water. How often have I looked out from that roadway at people boating or fishing and wondered about who they were and what they were doing.

We entered Mobile Bay and I was impressed again with the expanse of this body of water. I told Glen we should set a goal to kayak from one side to the other one day. Looking at the map now, I estimate that at the narrowest part our trip across the bay would be about nine miles one way.

We headed along, roughly following the shoreline. The sun was higher now and there was little to no wind, so it began to get warm. I splashed water on myself and into my boat to try to cool off. As we paddled on, I began to notice increasing cloud cover over and ahead of us. The weather prediction had been for thunderstorms and rain later in the day, and the clouds were beginning to have a darker look to them. I watched them grow darker and darker for a while before pointing them out to Glen. We were out in the bay, and there was no place at all for cover or safety. We would be the tallest thing on the water if a thunderstorm broke out, so we decided to head back to the river.

On the way back, I was becoming uncomfortable from the heat. There was no breeze at all on the bay, so I thought about slipping off my boat for a moment into the water just to cool off. I stuck my paddle down in the water to plumb the depth of the water. I was surprised to see my paddle submerged only about three feet! That wouldn't help to cool me off much, so I stayed on my boat.

Once we got back to the river, we had a refreshing breeze in our faces. We stopped at the bridge to stretch our backs. Glen got out and walked around. I preferred to just stretch out on my boat, but I wish I hadn't. I had put my sunglasses on my hat, and when I leaned backwards, they hit the hull of the boat and tipped into the water. Now, these were advertised to be "floating" sunglasses, and to be fair, they did float -- for about three seconds -- after which they promptly sank to the bottom of the river. 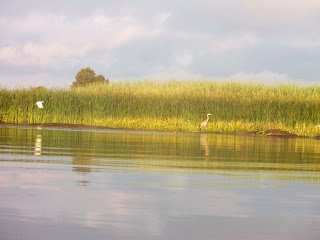 return journey. At the put-in, I had that same feeling I always do. I just didn't want to stop; I didn't want to get out of the water or out of the boat. But I was so glad we had the opportunity to go again after so many weeks of watching the clouds and the rain.

GLEN: As Frances's photographs will attest, we witnessed an incredible sunrise last week, and waters that shined like smooth glass. I was amazed, as always, and literally could not take my eyes off the scene.


The young men in the powerboat heading westward and away from the sunrise, however, were guided by a different excitement. Speed, of the velocity variety, of course. This is fine, and as a younger man, I would likely have been as thrilled by heading west at a rapid rate, away from the sunrise, as I was gazing east as an older man, being as still as possible so I wouldn't miss a second of the sunrise (I'm sure it has something to do with testosterone levels). This is fine, although I must say that my pursuit of seeing beauty did not affect the young men's pursuit of experiencing speed. Theirs, on the other hand, did take away from my enjoyment.

They never knew that such was the case, I am sure. They didn't know that the waves and ripples from their boat that hit our kayaks a few minutes later were symbolic of their influence earlier. As Frances has often addressed in her writings, our lives touch people in some significant way, whether knowingly or not. This must be particularly true of born believers in the Lord Jesus Christ, who bear within their spirits the living God Himself. I suspect that our mere presence as we walk with Him in faith and submission speaks to the innermost being of people. Add to this kindly attitudes, respectful demeanor, fitly spoken words, and an obviously willingness to self-sacrificially act on the behalf of others, and you have the very real possibility of revealing the Lord Jesus in every contact, discussion, and relationship. "Whatsoever ye do, do all to the glory of God" (I Corinthians 10:31).

Thus, every moment matters, and even more, every movement in and among those with whom we live our earthly lives. We are waves and ripples for the glory of God. Submitted to Him, our human faculties wash over the knowing and the unknowing, speaking of ancient glories that call to the depths of the human heart. Our own gaze is ever fixed eastward, as it were, on a risen Son far more glorious than the rising son, and in a manner that directs others to look also. Indeed, I so wanted to say to those young men in the speedboat, "Stop, turn around, and look!" I couldn't do so, but I can so live and communicate in such a manner that I call my world to an even greater witnessing of glory. Stop, turn around, and look! The Lord Jesus is risen from the dead! Our lives can declare this in everything we do, and they must.
Posted by Frances Davis at 12:14 PM