A Mother's Heart in War. . .The First Entry

Here is the very first entry in the journal:

It was late at night several nights ago when a knocking on our bedroom door broke the flow of our conversation. Noah came in to give us news that he had only just received.

"I am leaving in march for Camp Lejeune and then in June for Iraq."

I almost thought it was a joke at first. Perhaps I hoped it would be a joke, but no, his Team Leader had just called him and told him. I had really thought that we were beyond the chance of deployment now. After all, Saddam Hussein had been captured, the framework being put in place for a democratic Iraqi government, why would they need special forces now? It is a question I cannot answer, nor can he.

My first response after Noah left the room was to burst into tears. Not because I feared for his life, although that certainly was an issue. Hadn't I just read that more US military men had died in November than any month since the war began? But more than that I hurt for the pain and discomfort he would feel being separated from his family, his job, Aimee and all he found comfortable. A mother never wants to know her child is in a position of pain or need or discomfort. And I knew this deployment would bring all those things to his life and I would be powerless to relieve them in anyway. So I cried my tears of sorrow as Glen reminded me that we had given Noah to the Lord when he was born and to his country when he became a Marine. I know in my heart that if the Lord wants him in Iraq, he will be safer there than in my living room, so I do not intend to question the Lord's working in his life. 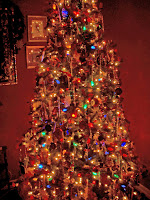 But as we celebrated Christmas today, I was struck by the thought that he would most liekly not be with us next Christmas -- our first without all our children around the table -- and he would likely have little Christmas clelbration at all.

But the winds of war are uncertain. Who is to know what six months may bring? I must put him in the Lord's hands for everyday not just for his deployment. nd in the meantime I can approa ch this prt of his Marine career as I have the others: by learning everything there is to learn and learning most importantly how I can support him and help him and learning how to pray for him.

Posted by Frances Davis at 7:03 AM