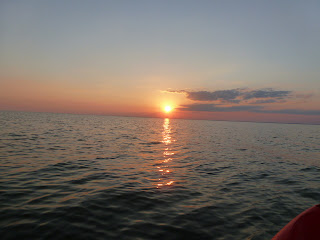 Today was our fiftieth trip! What a milestone.

We set out from May Day Park, which has become our favorite put-in. It seems this was to be a trip for meeting people.

As we were unloading our boats a man and his young son were removing their fishing gear from their truck parked next to us.  They were going to fish from the pier.  We had a nice conversation with them as we removed the boats and our gear, especially with the little boy who enjoyed showing off his fishing rod.

We put in from the boat ramp (to avoid the sand) and headed south as usual.  There was only one small cloud in the sky and the afternoon sun was bearing down on us.  It wasn't long before we both felt hot.  I splashed water up onto myself to cool off.

As we continued on, we saw a few fish jumping again, but not nearly like the last time we kayaked.  I noticed as were paddled how often our strokes would fall into the same rhythm.  Silently we traveled along, our paddles making a unison chorus on the water.  I reflected how like our life that is.  So often we are in the same rhythm, the same pattern, two different people running together on the same path.  To me it is evidence of the working of the Lord throughout our lives. 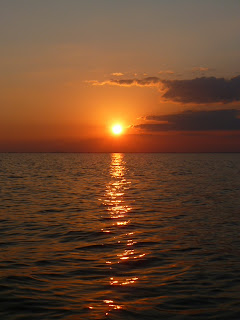 We paddled about 1.75 miles before we stopped.  I had marked the beginning of our trek before we started and used our GPS to track our path.  It was interesting to look at the path later and see how far away from the shore we traveled and how far down from our put-in we went.

As we stopped we ate our snack of grapes and snacks as we enjoyed the site of the sun coming down in front of the one lone cloud.  I let my feet dangle off the side of the boat into the cool water and the whole time was absolutely idyllic.

Suddenly it seemed as if the sun was setting much faster than we had expected.  We turned to go back and realized just how far we had to go in so little light time.  I started to paddle faster, not because I was in a hurry, but because we were then going with the current and it felt good to go fast.  Glen shouted to me, "You look like you are flying!"  I felt like I was flying, too!

Even as we were paddling fast, it still seemed our put-in was a long way away as the light waned more and more.  I was glad I had brought that amazing flashlight my son had given me for my birthday.  I was already developing a plan for using it if we needed to illuminate our boats.  I wasn't as concerned about seeing where we were going as I was being seen.

As we drew closer to our put-in in the dusk, we encountered another kayaker and behind her a woman on a sailboat.  The kayaker told us how glad she was to see us out enjoying the beautiful water.  As it turns out, they live in one of the houses along the bay and are often perplexed as to why more people don't enjoy its natural beauty.  We chatted with them for a few minutes before moving on, then paddled the short distance remaining to the put-in.

As we were taking our boats and gear off the boat ramp, another couple stopped us to talk about our time out on the water.  We were wet and carrying our gear, and the lady began taking pictures of us.  I thought she surely could find more interesting subjects than these wet kayakers, but perhaps we looked better than I thought!

This was a wonderful trip to cap off our first fifty trips.  We have loved kayaking so much and we lave learned so much about this area in which we live by experiencing its beauty firsthand.

I love the feeling at the end of a trip when we approach the put-in and I just don't want to go in.  I had that feeling on this trip.  I know that means we've had a wonderful time and I don't want it to end.

As we were packing up, that flashlight did come in handy after all.  By the time the boats were loaded in the car I needed the flashlight to see to secure them in place.

Its amazing how we have come to have our little systems and habits for kayaking over the years, such as what we keep packed for trips and how we secure the boats.  Even how we put two kayaks in the back of a Corolla is a neat thing.  I can't imagine how it would be to be like the friends we met on the water who live there and can just walk out the door to their boats (but I'd love to try it!)

Kayaking is something we love, and something we love doing together.  We had two years when we couldn't kayak because of my shoulder injury and that helped us appreciate it all the more.  It is special because we share it together and we love to share it with our friends.  We are now looking forward to the next fifty trips.

Posted by Frannie Davis at 2:25 PM