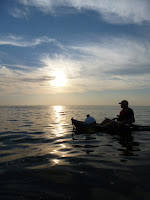 This trip was a surprise to me.

Weather, commitments watching our grandchildren and my work schedule have prevented us from having a window for kayaking for over a month.  I was busy working on soemthing at the house and Glen came in and said, "I thought we'd leave in thirty minutes."  This is not an unusual occurrence, so I asked him just where it was we were going.

"I thought we'd go kayaking."  Like a flash I jumped up to get ready.  Little did I know that "jumping" was to be the theme of our trip.

We packed the boats and were sure to bring along the new round cooler we had recently purchased just for kayaking.  It was designed to to float along in the water behind the boats.  All loaded up, we headed east.

We put in at May Day Park, which is now one of our favorite spots, and it was an incredibly beautiful afternoon.  The water was calm, the temperature perfect, and the wind almost non-existent.  The water was cool enough to be refreshing but no so cool as to give a chill.

We headed southward along the eastern shore, the new floating cooler bobbing along behind my boat, or so I thought.  As we paddled, I noticed I was having a hard time catching up and then keeping up with Glen.  Normally this isn't an issue for me but this day I was really struggling and I was beginning to feel discouraged.  It was about that time Glen noticed something was wrong with our "bobber."

"It looks like its sinking," Glen said as he paddled over to me and sure enough most of the cooler was under water.  That was because the cooler itself was full of water.  I had been having trouble keeping up with him because I had been towing an anchor!

I could barely lift it into my boat to empty it.  We were glad we had only put a couple drinks in the cooler to test it and hadn't carried a meal as we often do.  With my "anchor" safely stowed up on the kayak, my boat was much lighter.  We paddled on a little further but the most remarkable sight stopped us and we sat to watch the wonder of our Lord's creation.

All around us, and out far into the bay, fish were jumping.  Not one or two, but hundreds of them.  They nearly jumped into our boats and I've been waiting seven years for that to happen!  It was absolutely amazing.  We couldn't turn in a direction where the fish were not jumping.  We sat, listened, watched and enjoyed the show.  Of course, the pelicans got into the act as well, trying to take advantage of the exposed fish.

Finally we turned northward toward the put-in and sat off short on our boats to watch a glorious sunset.  As I looked at the sky and the sea and the sun -- and the wonderful man the Lord has given to me to share it all with -- my heart and my eyes were full.  I was overcome with just how much I am blessed and with what a wonderful life I have been given. 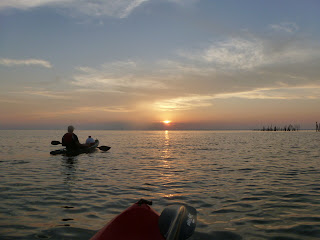 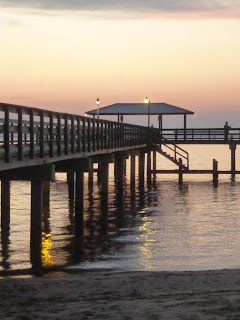 Posted by Frannie Davis at 1:18 PM