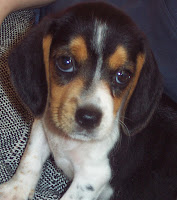 This is a Powder Room that could not have been written until now, it was just too emotional. In fact, even thinking about it now brings tears to my eyes.

Our family loves beagles. From Snoopy, to the current beagle member of our family, Sparrow, we have a soft place in our heart for those big-eyed, tri-colored, howling hound dogs.

We have owned four beagles in the past. Sparrow, a birthday present to me four years ago, is my favorite. She is sweet, loving and obedient. Only slightly behind Sparrow is Grunt, our first beagle.

Grunt was an incredible athlete of a dog (something that could never be said of our couch-potato Sparrow). He was named after the nickname given to Marine Corps Infantrymen, since he was given to us just as our son was finishing School of Infantry with the USMC.

Grunt came into our lives when our daughter Emmie was nine. Grunt was Emmie's dog and Emmie was Grunt's girl. Grunt loved Emmie. He would sit at her lap while she worked on her homeschool studies. He would sit on her pillow at night waiting for her to come to bed. She would make me give him a kiss good-night, just as I gave her one and they would share the bed.

About a year later, Grunt met with a tragic accident. I knew no one would be more affected by his death than Emmie. I sang her to sleep that night as I had when she was a little girl. I was so concerned she would wake up in the middle of the night, feel Grunt missing and be grieved, that I spent that night kneeling beside her bed, to be near her if she needed me. I wanted to be as near to her as possible in her pain. I wanted to be "very present".

In the Scriptures, David tells us the Lord is "a very present Help in times of trouble," (Psalms 46:1). He knows when we have difficulty, when we have pain and sorrow. He desires to be near us, to console us, to comfort us. He is the one described as "gracious, and full of compassion; slow to anger, and of great mercy," (Psalm 145:8). He is ever near, waiting to shower us with a love that is unlike any love we have ever known before.
Posted by Frannie Davis at 5:40 AM