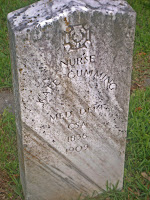 The inscription on the tombstone surprised me, the simple word, "NURSE".  Those five letters told me volumes of a woman about whom I actually knew nothing.

Her tombstone also gave more information.  It told that she was with the Medical Department of the Confederate States of America.  This touched my heart as well.  the whole reason I found her grave  was because I was helping others to mark the graves of those Confederates so they could be honored on Confederate Memorial Day.  Since my Scottish/Irish Great-great-great-grandfather died in the Civil War, I find it more than fitting to honor all those soldiers, and nurses, who died in that War.

Finding Kate Cumming's tombstone created a desire for me to know so much more about this woman, this nurse, who obviously sacrificed to care for the wounded and dying of the bloodiest war in our nation's history.  But first I wondered, what do I now about her without knowing anything about her?

~I know she saw great suffering.  At least 618,000 men died during the Civil War.  Many of them would have been treated by people just like Kate.  With supplies, medicines and surgeons in short supply, Kate would have hundreds of men suffering incredible pain and agony.  Likely, she felt helpless to ease their pain, to lessen their suffering in any way.

~I know she was a woman of great compassion.  I can see no other reason why she would have done what she did.  What else would have compelled her to be a part of the medical department of the CSA?

I love this answer I found on the internet: "The world's women have always come forward to aid and comfort their husbands, fathers, brothers and sons during wars. Bless them all."

At a time in our history when nurses were primarily men (Florence Nightingale is traditionally known as the first modern female nurse, emerging during the Crimean War in 1853), all able bodied men in the South were needed as soldiers.  None could be spared to be nurses.  As in almost all wars in our nation's history, when the men went off to war, the women stepped up to the plate and did what was needed.  This is what Kate probably did.  She just did what was needed to do.

~I know she was able to control her emotions.  She would have seen great sorrow and suffering, but as an extremely busy nurse, she would not have been able to give in to those emotions.  All nurses know this feeling.  Those emotions must be stored away somewhere for a later day, another time when one has the luxury of crying and grieving over the sorrows of the day.

~I know she was a strong person, not only emotionally, but probably physically as well.  She likely had to help move wounded soldiers who weighed more than she did and who could not help in their movement.  She would likely be responsible for carrying supplies.  She might have been responsible to help restrain soldiers who had to experience the horror of surgery without any available form of anesthesia.  In that situation, it is not unlikely she would have thrown her whole body over the patient to help prevent him from further injuring herself.   Nurses know the feeling of disregarding one's own safety to ensure the safety of their patient.  It happens hundreds, thousands of times across the world everyday and each nurse would likely tell you she or he was "just doing my job".

Actually, Kate and  I have a lot in common.  Both nurses, we both have a Scottish/Irish background, we both have lived in the same city and we both love to journal.

Posted by Frances Davis at 9:46 AM

Email ThisBlogThis!Share to TwitterShare to FacebookShare to Pinterest
Labels: Kneeling In Blood