It really seemed like a good idea at the time.

It was almost twenty years ago and we had just moved into our house.  We decided we needed some shubbery around the perimeter of the backyard.  After talking to the experts at the local nursery, we pick out 42 ligustrum plants, brought them home and planted them. 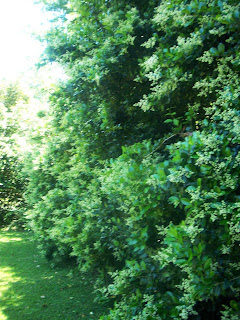 They were small then, maybe 18-24 inches high.  The nurseryman told us they would get much bigger, and they did.  They are now at least 18 feet high.  Just as the nurseryman said they would, they provide beautiful dark green foliage.  They provide the wonderful privacy hedge he promised.  They also provide something we did not anticipate.

Every year during late April, early May, these 42 huge plants begin to bloom.  They bloom with a great abundance of tiny white, extremely fragrant blooms.  This would be a delightful experience, except, the first year they bloomed we became aware that we are both highly allergic to the blossoms.

Even the short five minute visit to the backyard to take the photos left my eyes itching, my throat sore and my head throbbing.  Once in full bloom, the fragrance begins to waft in through our den windows and our house isn't even an escape.

Last year we planned our vacation to Boston and New York City.  As we left on Mother's Day, we joked that we were leaving just as the ligustrum were blooming and we wouldn't have the allergy attacks the blossoms usually created.  We had not traveled very far northward before we realized both sides of the interstate were banked with huge ligustrum now in full bloom.  The fragrance was being blown into the car by the air conditioning.  Mile after mile, for over three hours, we were bombarded with an attack of allergens that even our allergy medicine could not fight. 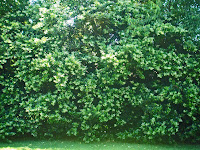 Who would have imagined that something that seemed like such a good idea at the time could each year, without fail, bring us such misery?  Isn't that true of other things in our lives?  We have things which seem like a good idea at the outset, but upon full realization we see we have made quite a mistake.

He has given us the Scriptures, the fellowship and counsel of other believers and the Holy Spirit to lead and guide us in His will.  We should take care to avail ourselves of everything He has given us so that we see the path He has made straight before our face.

While as Christians, our salvation is secure, but we must one day give account for all our actions.  It is wise of us to seek His wisdom, His guidance and His leading in exactly what those actions should be.

"Trust in the LORD with all thine heart;
and lean not unto thine own understanding.

In all thy ways acknowledge him, and he shall direct thy paths.
Be not wise in thine own eyes: fear the LORD,
and depart from evil."
Proverbs 3:5-7

Posted by Frances Davis at 8:54 AM