I have a new bracelet given to me for my birthday by one of my best friends, Ashlee.  It is a Morse Code bracelet. 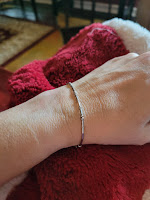 For those of you who may not be familiar with Morse Code, it is a method used  to encode text  as sequences of two different signal durations, called dots and dashes.

My bracelet contains a coded message from my friend and the meaning is known only to those to whom we choose to reveal it.  The meaning is actually a statement made to me, about me, by another nurse years ago.  It has been a running joke between me and Ashlee and we both laugh heartily when we think of it.  In fact, I laughed when I opened the gift, saw the bracelet and the decipher printed behind it.

And it reminds me of another secret.

If you pull up Glen's contacts on his phone, you will not see the name "Frannie Davis" listed.  But you will find my phone number under something he calls no one else but me.  It is a term of endearment which he has called me for a long time, a name that no one else calls me.  It is an expression of love.

"...To him that overcometh will I give to eat of the hidden manna,

and will give him a white stone, and in the stone a new name written,

which no man knoweth saving he that receiveth it."

To think there is a day coming when the Creator of the universe, the God of all things, will give us a name known just between us and Him.  How personal, how intimate, how loving!  He loves His children so much that He has prepared a special name, just for them.  For each one of them!  Only Someone known as "the Word" could possibly come up with so many personal, applicable, special secret names.  How great and loving is our God!

Posted by Frannie Davis at 8:00 AM