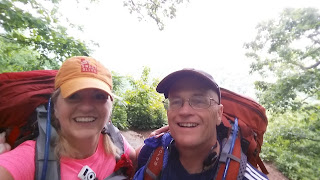 On the morning of May 27, 2015, Glen and I were just beginning the third day of our second section hike on the Appalachian Trail.  One of the most traveled and beloved United States trails, the AT travels through 14 states from Georgia to Maine.  We had begun at Woody Gap, GA and were hiking southbound to the southern terminus of the AT on Springer Mountain, covering 20.5 miles.  We would then have another 8.8 miles along the approach trail (which does not count in "AT" miles) to reach our car.

We were breaking down camp, taking down our tent and putting away our sleeping gear when two people traveling northbound came running up the trail.  They were not hiking, they were running and were gone in a flash.
Only later did we discover that at 5:56 am on May 27th, Scott Jurek had started a personal journey to complete the Appalachian Trail. It is usually recommended that one take six to seven months to complete the entire trail, called a "thru-hike".  Scott Jurek, however wasn't going to simply hike this trail, he was going to run it.  His plan was to complete it in 46 days - a seemingly impossible quest- and he indeed completed it in 46 days, 8 hours and 7 minutes. (You can read about his thru-"hike" here.)
I enjoyed following Jurek's progress the 45 days after the end of our section hike, especially since we had seen him on the trail shortly after he started his journey.
Scott Jurek started that day with a quest.  Don't we as Christians start each day with a quest as well?  We have the quest to please the Lord.  It is the how we go about it that is the difference between an attempt and a completion.
Scott Jurek ran what is called a "supported" hike.  This means he did not carry a tent and sleeping gear, nor did he carry what he needed to eat for days on end.  Someone met him at trail heads to supply him with food and he slept in a van or pre-determined, pre-prepared place.  This was so he could carry as little on him as necessary to be as fast as he could be.  Without this support system, he could have never completed his quest.
In attempting our "quest" we also must have a support system, and it must be the correct support system.  I once heard a preacher say:

"We freely receive God's acceptance in the the Lord Jesus Christ, or we attempt to work our way into favor by keeping His statues and judgments.  The latter is impossible; the former is assured to all who receive God's free gift of grace in His Son."

We must not simply depend upon what we "carry" in and of ourselves to provide our needs and to receive God's favor.  Our trust, our faith, is not in ourselves, but in our support system, the Lord Himself.

"According as His divine power hath given unto us all  things that pertain unto life and godliness, through the knowledge of Him that hath called us to glory and virtue:"

As much as it is our quest to live in a way that honors the Lord, it is more His quest.  His design, i plan is to conform us to the image of His Son.  He wants our success more than we do and He works this out and through us as we trust Him by faith to do so.

"For it is God which worketh in you

both to will and to do of His good pleasure."

"And ye are complete in Him,

which is the Head of all principality and power."

We are "His workmanship" as the Apostle Paul said, and what He has begun, He will finish.  Our role is to trust and obey by faith.

When Scott Jurek finished his quest, he stood on the summit of Mt. Katahdin with his wife and support team and celebrated his accomplishment.

In our end, we will kneel before Him, with hearts full of praise and thanksgiving for His faithfulness, His work and His grace.

"Being confident of this very thing, that He which hath begun a good work in you will perform it until the day of Jesus Christ."