This was a beautiful morning trip.

We hit the bay way by 5:47am.  The sun had not yet begun to peak over the trees, but there was already plenty of light...civil dawn as it is called.  The air temperature was 74° and a quick check on my phone told us the water temperature was a nice 84°.  The wind was a mere 3 knots. 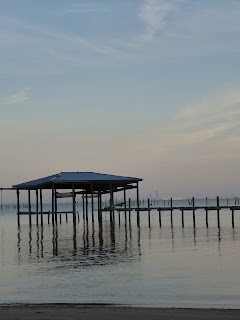 When we reached the park it was just about idyllic.  Soft little thoughts of waves ambled up to the shore.  We unloaded and were even a little surprised at how cool 84° can feel against bare 98° skin which had not to long ago been nestled warm under the covers.  The water didn't stay cool for long, though.  The coolness was a fleeting thought as we first stepped our toes in the water surprising a few baby crabs looking for breakfast.  We paddled southward and marveled in the beauty of the morning.

The glow of sunlight was becoming visible on the building on the western shore, but the trees behind us blocked our view of the sunrise.  A refreshing breeze blew along, not enough to help us, not so much as to hinder us, just enough to add another layer of pleasure to an already wonderful morning.

As we paddled along, the pelicans were dive bombing for their breakfasts.  Only once did I see one come up without a snack for his efforts.  They would quickly swallow their treat as soon as they emerged from the water and then fly away as if they were afraid we would be doing the same thing to them.

After thirty minutes or so (I'm not sure because I had forgotten my watch) we stopped for a water break.  When we do this, we connect our two kayaks together (unless the water is rough and then it is hazardous to do so.)  I enjoyed looking out at the expanse of blue in front of me. 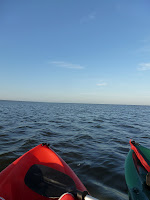 The Bay, and then the Gulf of Mexico and then the ocean spread out before me as far as I could see.  There was nothing before me but water.  The sky was a gradient ceiling of aquamarine and London blues and flowing into the floor of the deep turquoise and sapphire of the water. (Is there a significance in the fact that I describe these beautiful things by gemstones?) I didn't even bother taking my camera out of its waterproof container because I knew there was no way it could do this sight justice.

As we paddled past the bay houses and their piers I wondered about each one.  Some seemed made of simple materials, yet perfectly created for their purpose, with little ladders to reach down into the water and benches upon which to fish or watch the gorgeous sunsets, some even had what appeared to be showers.  Others seemed so ornately designed and created, yet appeared to lack the practicality that would seem so necessary out on the water.  Why have the boat house at all if it couldn't house a boat, or give you a place to sit or fish or swim?  Why have it if it were just for looks?

As we were paddling back, we encountered some waves pushing back from the shore.  We found ourselves parallel to the waves, a situation one wishes to avoid in a kayak especially if the waves are of any significant height.  If these had been any higher, we would have had to change our direction so that our bows  but as it was, they were only annoying and didn't cause us any threat of capsize.  After a few minutes the waves leveled out and it was a simple easy paddle back to the put in.  But I had a little surprise in getting there.

I had gotten my sights wrong along the way and I thought we had much farther to go than we did.  When Glen started heading toward shore, I thought he just wanted to paddle further in that we had been, then I realized the put in was upon us.    I have always said that things look so different coming back than they do going out and it was surely the case today.  I usually make a point of making visual notes along the way to help remind me.

We paddled our boats right up onto the shore and started to load up.  This meant that we were walking through the water into the sand to the car.  I know this sounds obvious, but in all our years of kayaking in rivers and our years of not going to the beach, I have come to appreciate the lack of sand.  I spent several minutes trying to eradicate every grain of sand from my feet and shoes.  Finally, I walked out onto the pier and put my feet into the water to wash off my shoes and feet.  That's when I saw the little fishes swimming by.  It was like the last little wonderful part of an already great day.