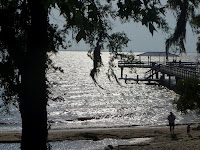 I guess if I can be Clintonesque, it really depends upon the definition of the word "trip."

Our goal was to leave early enough in the afternoon to avoid the five o'clock traffic, but late enough to also avoid the heat of the sun, which punished me so much last time.  We set out around 4:30pm.  While the westbound traffic was already heavy, the eastbound lanes were clear.

We headed again to Daphne, but this time to May Day Park, the area we had seen from the water the last time we were out.  I had looked it up on the satellite map and then plugged the address into our GPS.  It is a beautiful little park with shady oaks, a nice boat launch and a large beach area.

We unloaded and put our kayaks on the beach but our focus was on the wind and the waves that wind was creating.  This was definitely some rough water and it would clearly be a challenging ride for us.  Even well past the shore the swells and waves kicked up.

We found it hard to hold onto our kayaks in waves to even sit into them.  I found it was best for me to back up to the surf where my weight would wedge the boat against the sand until I was ready to push myself off with the paddle.  I had to push hard with the paddle to get past the waves.  I paddled out about five feet and then turned back to check on Glen's progress.  He too had decided to back up to the surf to enter his boat.

Glen's higher upper body mass in relation to his small kayak makes him less stable in his kayak than I am in mine.  He quickly made the call, "It's just too rough."

Even once we made it past these waves, there would still be a higher risk of capsizing with this wind.  We pulled our boats in and decided to walk around the boardwalk by the beach.  We thought perhaps the wind might die down in a bit and we would have some smoother sailing later. 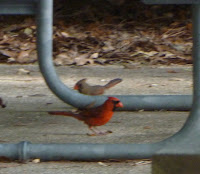 I took some pictures -- Mr. & Mrs. Cardinal (Glen's favorite bird) graced us with their presence, and it was a beautiful afternoon.  The sky was a gorgeous blue, the sun sparkled on the water and the wind, while not conducive to kayaking, felt great while sitting on the shore.

After a while we decided the wind wasn't going to settle down anytime soon, so we had our dinner at the picnic tables instead of out on the water:  fried chicken and cole slaw.  After our meal. and still hoping for a settling down of the wind, we sat out on the pier to watch the sun play on the water. The sound of the waves crashing on the beach and the feel of the wind on my face reminded me of being at Orange Beach on the Gulf of Mexico.  I checked the wind speed, so we would have a reference in the future, and it was 15 knots, or 17.25 mph.  I will remember in the future that this is just too much for us. 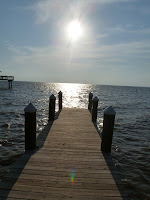 We had met another kayaker when we first arrived, who was hoping to fish from his kayak.  We noticed that he, too, had turned back.  With a great deal of fishing equipment loaded on his boat, he did not want to risk capsizing and losing some of his equipment.

Although we were soon packed up and head for home, after paddled only a few feet, it was still an enjoyable afternoon.  May Day Park is a very nice park, with a playground for the children, picnic tables, a boardwalk and a nice beach area.  I'm sure we will come back to it again on a day when we can go farther than five feet.

Posted by Frannie Davis at 9:44 PM