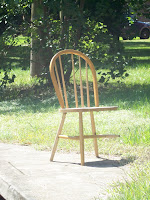 It has been sitting on the side of the road for at least two weeks now.

At one time, this wooden chair was new. It was a source of excitement for its first owner. It met a need and members of a family, maybe several families, used it around their tables. This chair was part of holiday celebrations, birthday parties and serious family discussions. Perhaps it was a place were the father or mother had their daily Bible reading and prayer. Maybe it was where a youngster fidgeted as they struggled with homework. The chair was part of the household.

Now it sits on the curb, not even useful enough for someone to stop and pick it up. Why?

No one has faith in the three-legged chair. They know if they sit on the chair, they will fall. They believe the chair is beyond hopes of repair. It has played out its usefulness. Even worse, the chair is thought to be a danger; if someone sits on it, they could be seriously injured.

I feel sorry for the outcast chair. I wish I had the skills to repair it, to bring it back to a state of inclusion in a household, to see little legs dangling from its seat once again.

There are many people in our world, whom at first glance appear as this three-legged chair. As a society we have lost faith in them. Maybe we see them as beyond hopes of repair. They have played out their usefulness. Perhaps they have wasted their life with "riotous living". Or perhaps age, illness and frailty wrack their bodies. There are some who from their birth were like the three-legged chair, never had everything we think they should have had. There are some that have given themselves to lifestyle so foreign to our own that we consider them dangerous to ourselves. They are outcasts and no one dares to bring them in to their homes.

These are just the ones to whom our Lord reached out. He touched -- physically touched-- the leper. He purposefully made His way through Samaria, in a time when the Jewish people had no dealings with Samaritans, and spoke with the woman at the well. He ate with the tax collectors (still unpopular today) and the sinners. He died between two thieves.

In our Lord's economy, there are no wasted lives. In His eyes, there are none past redemption until that last breath has been taken. In our Lord's hands are nail prints made to purchase the pardon of each soul, not just the ones who appear desirable. May the Lord open our eyes to see with His eyes, with His wisdom and His heart.

UPDATE: This evening, Glen brought the three-legged chair to our house. It is his intention to repair, refinish and redeem the chair that no one else wanted.
Posted by Frances Davis at 9:25 AM

Ultimately aren't we all a three legged stool?
Hope you'll post a photo of the redeemed chair eventually!