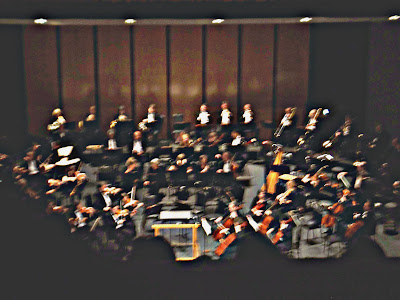 Before the performance, most of the members of the orchestra sat on the stage warming up. Each was playing their instrument in their own way without any notice of the artist next to them. We noted that the flutist was practicing a particularly complicated piece of music on her piccolo. She played the same small section of notes over and over again.

A few minutes later, after all the orchestra members had taken their seats and the house lights had dimmed, the conductor stepped to the podium. He raised his arms, and the entire orchestra played in beautiful notes of harmony and melody.

To me this speaks so much of the church today. We have so many different factions of the Church, each so busy doing their own thing, playing their own instrument, seemingly oblivious to the other groups around them carrying out their own plans. Then there are some Christians who have ceased from their labors all together and simply sit and chat. Some don't even fellowship with other believers anymore, but have set themselves apart, not moving, not talking, not utilizing the gifts the Lord has given them.

But one great day, our Conductor will step to the podium of Heaven. He will raise those beautiful nail-scarred hands, and in a chorus the likes of which have never been heard, Christians of all groups and factions, will sing in harmony and melody. Their voices will mingle and blend in the song of the redeemed, singing to the Redeemer.

WOW! What a well-written post. I could see, hear and feel it all.

Thanks so much, Sue. I didn't mention that the performance began with the orchestra playing the National Anthem. The audience of course bounced to their feet. What was surprising was the majority of the audience sang with the orchestra. It was such a moving memorial to end 9/11. By the end of the song, I had tears down my face.