We were relieved as we drove up to the put in to see Pole Cat Bay calm compared to our previous visit. We put in and circled around South to Mobile Bay. When we crossed under the bridge of the Causeway and entered Mobile Bay we encountered surprising swells and waves. It took a good amount of concentration to keep on course and to maintain balance.

We headed closer to shore than we had done previously, hoping the water would be 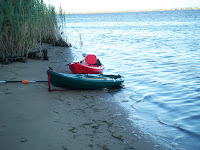 calmer, and it was. From that point on it was a fairly smooth paddle. We reached a small area of sandy beach, although not the one we had hoped to reach. It took a little maneuvering through the shallow water to remain in enough water to stay afloat, and still come in to the shore.

Once out of our boats, we had hoped to sit on some driftwood as we ate our snacks, but ants (and some funny hopping type insects) discouraged that. We had our "picnic", enjoyed the scenery and enjoyed having a place where we could stretch our backs.

As we were heading back, the sun was starting to set. I was planning on taking some sunset pictures, but the waves by this point were much to steep for me to take my hands off the paddle for more than one picture. The great thing was that the waves were actually pushing us along our way. I would feel the wave come from the back of my boat and would paddle forcefully with the wave. When it had passed, I would paddle normally until the next wave came. Glen told me when we were back in the car, he had wondered how I kept getting so far ahead of him. 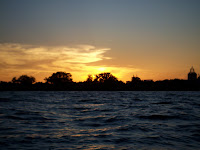 Once we made it back to Pole Cat Bay, the water there was once again calm and still. We both enjoyed sitting in the water for a few minutes, but the light was quickly disappearing. Reluctantly, as usual, we left the water for another day.
Posted by Frances Davis at 7:44 PM