An empty plate and bowl full of lemons.

It was the sign of a man who cares deeply and needs to show it.

Marie had come home this morning and tonight we gathered at the table for dinner. There were five plates. One plate was empty, as was the glass, but beside the plate was a bowl full of sliced lemons. Anyone who knows Noah would recognize that as his plate. The bowl of lemons - the token that we will never forget, never stop praying, never stop counting the 366 day (or so his orders say) until he once again rests his feet under our table.

As I write this, I sit in his room with all his belongings stuffed into his closet as tightly as sardines in a can. I can look up and see his Dress Blues hanging from a hook on the ceiling or his cover on top of the shelves. The room is full of his smell on his clothes. I told Aimee tonight that she could come over anytime, if only to smell his smell on his clothes. . . something another girl would understand.

Then there was the joy of hearing his voice. But I didn't feel like I could talk -- to get too close is only to have to tear oneself away again. But I can pray, and I will pray. 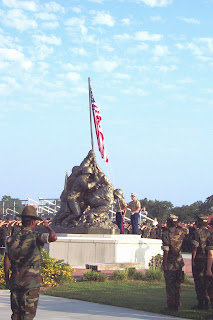 I remember when Noah left for boot camp he asked me to pray for five things for him. I made a bracelet of beads representing those five things so that every time I would see it I would remember to pray. Yesterday, I made another bracelet, again with five parts. My prayers are for strength, endurance, integrity, wisdom and accuracy...and one more...faith.

My bracelet for boot camp lasted until the day we reached Parris Island. I intend this one to last until Noah pulls into our driveway next year. I pray I will be as faithful in supporting him this time as I tried to be during bootcamp. May the Lord show me what to do and when to do it.
Posted by Frances Davis at 8:00 AM