Look at that tree!

"Look at that big tree up there!" I called to Frances, directing her attention to a very large trunk of a tree that had obviously fallen into the river, and was slowly float

ing along the shoreline.

Frances had paddled ahead of me, and was about 15 yards starboard. She was looking at the same object, but had decided that it was not a "big tree." She looked back and informed me that it was instead one of the friends we often see when we kayak on the rivers in our area. "It's a gator," she said.

I didn't believe her, and fixed my eyes even more closely on the object. I had to admit that, as usual, the small protrusion in the front of the "tree" looked like the crest of an alligator's head. However, the back part that always surfaces just beyond the head was impossibly large. "That's not a gator!" I yelled. "There's no way that could be a gator!"

Frances called back that yes, indeed, it was, and then the tree submerged as gracefully as all alligators descend from the surface. I was stunned, and grateful that the creature had been so far from our boats. I can't imagine what it would have looked like any closer. We immediately begin to estimate the size of the gator, and at the minimum, the very minimum, we're talking 15 feet in length. But far more stunning, the girth must have been as big around as a medium sized oak tree. This alligator was humongous!

Again, we see alligators on our waterways all the time. They are beautiful creatures to watch as they swim. Serene is the word that always comes to my mind, along with graceful, elegant, and laconic (words that I would never have suspected would describe alligators until I began to regularly encounter them). They never seem in a hurry, and most importantly, they never seem the least bit interested in us. They cross our paths, we cross theirs, and hopefully, ne'er the twain shall meet. Frances tells me that her research indicates that kayakers very rarely have issues with gators. You don't feed them, you don't get near the shores where they may be nesting, and you leave them alone as they swim. So, no harm, no foul as yet, and may God allow our peaceful coexistence to continue.

Back to "the creature." Did I mention he was at least 25 feet in length? And as big around as a small submarine? Well, memory may be enhancing his dimensions, but the fact of the matter is that this really was one large fellow. It makes me wonder how old he is, and if there's any others out there like him. 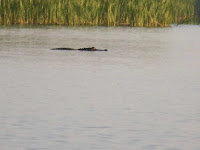 Probably, and I wish them all well. They serve a useful purpose in God's creation, no doubt, and they reveal His marvelous creativity and wisdom. However, I will continue to hope that any contact we have is from a safe and respectful distance. Because any creature 35 feet long and as big around as a tunnel is not someone with whom I desire close relations.


I had seen the gator long before Glen pointed it out to me.
It was the first time I had ever seen a gator casually swishing his tail in the water, and that tail was huge! It caught my eye because the sun reflected off it as it slowly moved back and forth. I was impressed by the length of the snout, but that tail was what was really impressive.

As we begin to get close to them, most alligators slowly drift down into the water and disappear. This fellow didn't. He kept his eyes above the surface of the water the whole time, watching us as we crossed his path.

Coming back, we looked for our big buddy, but he was no where to be seen. We saw plenty of other alligators, but not the enormous one we had seen before. Alligators don't scare me. If you don't feed them, and stay away from their nests, they tend to leave you alone too. It's a very respectful relationship.

As we were getting closer to the area on the river were we would turn to head to our put-in, we did encounter something that really frightened me. I heard the rumble of thunder from the cloud bank above us.

Holding a metal paddle in my hand, in a river full of alligators didn't instill a feeling of confidence in me. I sure didn't want to be in alligator infested water, having to have one of us resuscitate the other after a lightening strike. Statistically, we actually have more of a chance of getting hit by lightening, than by getting attacked by the alligators. Maybe unless we got hit by the lightening first and ended up injured in the water...

So, I put it in high gear, tightened up those core muscles and pulled my boat through the water almost as fast as I could. Glen was happy to follow in my wake, because he always loves an excuse to "crank the boats up". I don't think he thought much of the thunder, he just likes a reason to paddle fast.

Before we quite reached the put-in, an air boat flew by the area. He came crashing through the reeds, tearing them apart and it really saddened me. We had just been on the other side of that bay area on Monday, so I knew there wasn't a passage way there, he had just taken his powerful motor and forced one.

Now, we are careful in our kayaks. We try not to get too close to any birds that might be nesting (and we sure stay clear of those alligator nests!) and we try not to disturb any areas of the wildlife along the way. Our boats, of course, are silent and we even find ourselves speaking in quieter tones as we paddle along. To see someone have such flagrant disregard for the habitats of other creatures bothered me.

I'm not a kayaker (yet) but I hope I can still follow your blog. This is very nice and I can use my imagination to pretend I'm paddling along in the beauty and stillness of God's wonderful creation.

Char,
Please feel free to "ride" along with us. Everyone is welcome!

Thanks, Frances. I will. Forgive me if I panic the first time I encounter an alligator though! We don't grow them critters up in this neck of the woods!