FRANCES: This was written June 21, 2008 after a trip from Meaher Park.

Today is Saturday and we set out early. We were on the road at 6:01am. This time we checked off everything before we left -- PFD, check. Two complete paddles, check. Everything we needed, check.

We put in at Meaher Park there was already a row of cars with their trailers waiting when we arrived. Of course, our car would be without the trailer.

We unloaded quickly and immediately upon getting in the water, I tried out my new waterproof camera bag. The sun had not been up long as was beautiful 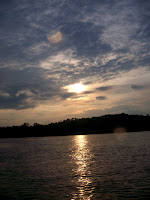 sparkling on the water. (To this day, that is one of my favorite photographs.)

As we paddled off, we encountered the effects of our first low tide in this little bay. It is very difficult to paddle -- no let's just say push -- a heavy person through mud and two inches of water in a plastic boat. We paddled and pushed ourselves around until we found water deep enough to make movement smooth. We had planned to go out toward the bay, but decided to head toward the deeper river water instead.

As we went through the pass between the two, I noticed a foam on the water and small black bugs floating in the water. It reminded me of when we were at the beach and the fire ants were in the pool. One bite had become a big reaction which has affected my life for seventeen years. I paddled wide of the bugs. Later Glen found a live fire ant on his legs. I was glad my epinephrine was safely clipped to my waistband it the waterproof container. (It even floats!)

We headed north up the river. The water temperature was perfect and there was a nice breeze. There was very little traffic on the river, we basically had it to ourselves. We went further this time than we did before on this river.

We were resting at the point that leads to Cedar Point and Bay Minette when we noticed him. His head was at least as long as my whole arm. He was easily the biggest alligator I had ever seen. He had noticed us, but wasn't interested in us -- at least not as interested in us as we were in him. He kept going his way (in the direction we had been going) and we decided it was a good time to turn back the other way.

But coming back was quite different from going out. The current, going downward across the river, was quite strong. If you stopped to rest, it pushed you back to where you had been. So I just braced my feet and decided to take some deep breaths and "do it". Somehow I felt it wold be easier once we got past the Causeway crossing the river. It took so much more effort to cover the same distance but finally we made it to the bridge and it did getmuch easier.

When we made it to Bay John, the water was cooler and refreshing after the work we did on the river. Glen challenged me a race to the dock and I worked up a sweat again (we won't say who won.) We decided that between the race, the current of the river and the increased heart rate from seeing our "friend", we had burned the equivalent of two Krispy Kreme donuts. And yes, the light was on! Here is an entry about the same day on my
Powder Room blog: http://thecafepowderroom.blogspot.com/2009/05/fun-and-work.html

Posted by Frances Davis at 8:17 AM