It really would have been a great moment to catch on film.  At least that's what the elderly woman watching me thought.

It was a pretty day and I needed to sand a counter-top I was putting on some cabinets in our Sun-room.  I wanted Ellie to be outside with me, so I took her 30 foot leash and  put it on the Power Tower under our carport. 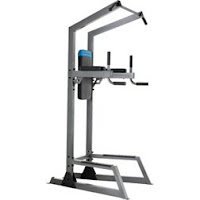 Now if you are not familiar with a "Power-Tower", it is a tall, large, heavy piece of exercise equipment used for pull-ups, dips and other types of torture. With the handle of her leash over the handles of the Power-Tower, I felt she was safe, but could still sniff around as much as she wanted.  I hadn't taken into account her power, her speed and her reactivity.

She was off in a flash, barking the whole length of her 30 foot leash.  An elderly woman was walking her dog along the sidewalk and Ellie wanted to meet this new dog.  In her speedy rush to make a new friend, the leash pushed against the grill, knocking it over.  One wheel rolled out of site, ashes flew against the driveway and Ellie kept pulling.  I was between Ellie and the Power-Tower.

I wouldn't have thought she could do it, but Ellie pulled hard enough on the leash to pull the Power-Tower over.  Of course, you see where this is going.  The Power-Tower fell on top of me.  Ellie was still straining at the leash, which was now in my hand, because the lady and her dog had stopped to watch the festivities and Ellie still wanted to greet the dog.

"I've seen that on a video before," she stated with a broad smile.  I don't know if it was the strong beagle pulling on me, or the weight of the Power-Tower now resting on my arm and hip, but I did not find the same humor in the incident that the woman did.  In fact, I was highly annoyed.  I wanted her to take her dog out the the line of Ellie's sight, so she would calm down, but the lady seemed to be totally enjoying her live version of "America's Funniest Home Videos."

I managed to push the Power-Tower back into place, extract Ellie's leash from the legs of the grill and take her inside.  Glen came up about that time and took care of replacing the wheel on the grill and cleaning up the ashes.  I assessed my  injuries, which were not nearly as significant as they felt.

After I  wiped off my bruised pride I realized the lady with the dog probably had no idea that the weight of the Power-Tower was painful.  Or that having a pulling beagle on a leash is no fun.  I think she really enjoyed the whole escapade. She may have chuckled about it all the way home.  Perhaps she had fun regaling the incident to her friends.  And that's okay.

As Mr. Bennett said to his daughter, Lizzie, in Jane Austen's "Pride and Prejudice,"  "For what do we live, but to make sport for our neighbors and laugh at them in our turn?"

If my little accident, which caused no lasting injuries and simply bruised on my arm, brought a moment of joy, a chuckle of laughter to this woman's life, then I am happy to have brought a smile to her face.  Did I think so at the moment?  Of course not.  I reacted the way most of us would have reacted.  But upon reflection, I think it probably did look pretty funny.  There is no harm in being laughed at, but complaining and bitterness are damaging to our souls.  Better to laugh with the lady and find some enjoyment in the moment myself as well.

"I complained, and my spirit was overwhelmed."
Psalms 77:3
"Let all bitterness, and wrath, and anger, and clamour, and evil speaking, be put away from you,
with all malice:  And be ye kind one to another, tenderheared, forgiving one another,
even as God for Christ's sake hath forgiven you."
Ephesians 4: 31,32

Posted by Frannie Davis at 4:00 PM

In particular, keep an eye out for free spins with no wagering 메리트카지노 restrictions. Do not think of these extras as gimmicks, as they're frequently supplied for a reason. There are some solid causes behind the rapid growth of the web playing trade, which embody quick results and almost fraud-less betting.