The idea of someone taking a block of marble or rock and carving out of it something that looks as if it is alive amazes me.  Even the thought that the artist somehow knows, or feels, what to remove and more importantly what not to remove, astounds me. 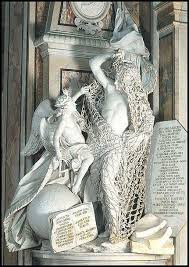 Perhaps my favorite of all sculptures is "il Disinganno" or "Release from Deception" by sculptor Francesco Queirolo, produced in 1752-54.

This statue depicts a fisherman caught in a net being released by an angel.  This magnificent work of art was carved from a single piece of marble.  It can be seen in Capella San Severo, Naples.  Apparently, only Francesco was brave enough to attempt this piece since all the other masters from the country considered it too ambitious, or even impossible.

The thing I love the most about this sculpture is the net itself.  It appears as if Francesco used threads of rock and twined them together for his creation.  The minute detail in this, and so many other sculptures is what draws me to them.

The sculpture describes a man who has been set free of sin, represented by the net into which the artist put all his extraordinary skill. An angel, with a small flame on his forehead helps the man to free himself from the intricate netting, while pointing to the globe at his feet, symbol of worldly passions. An open book rests on the globe; it is the Bible. The bas-relief on the pedestal, with the story of Jesus restoring sight to the blind, accompanies and strengthens the meaning.

While I love the idea the sculpture portrays, I love more the thought of the artist toiling over this creation for years.  Every twist of every strand of net had to be painstakingly carved by hand.  It is said that Francesco refused to burnish the marble of the net for fear it might crack the delicate pieces.  In my mind I can see him chipping away at the head of both the angel and the fisherman, creating the sweeping curls that look as if they just need a hand to brush them aside.

The talent and skill pieces like this reflect, cause me to be in awe of the artist.  Yet I know that this talent, this skill, this perseverance is a gift from heaven.  It is a mere shadow of our Lord who is the author and inspiration of all art, all beauty, of all that is lovely.  He alone is the great Creator.  From monstrous balls of fire in the sky, which we call stars, to infinitesimally small creatures only visible under a microscope, our Lord has created them all.  He created them by the power of His Word and He maintains them all by the same power.  There is nothing in His creation not intimately known by Him.  Such thoughts make me want to join the Apostle John:

"And I beheld, and I heard the voice of many angels round about the throne and the beasts and the elders: and the number of them was ten thousand times ten thousand, and thousands of thousands;

Saying with a loud voice,


Worthy is the Lamb that was slain to receive power, and riches, and wisdom, and strength, and honour, and glory, and blessing.


Blessing, and honour, and glory, and power, be unto Him that sitteth upon the throne, and unto the Lamb for ever and ever.


And the four beasts said, Amen.


And the four and twenty elders fell down

and worshipped Him that liveth for ever and ever."