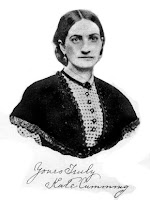 Nursing is one of the few professions that allows a person to almost completely change their career while staying in the same profession. Nursing offers the ease of movement from one specialty to another so that a person can find an area in which he or she is happy and interested.

I have benefited from this ease myself, beginning as a neonatal nurse, then becoming an obstetric nurse. I even worked for three years as a "clinical computer analyst" before moving back to obstetrics. It is a comfort to know that if you become dissatisfied in one area, you can learn and explore another.

As I read Kate's journal, I am impressed with how much change she encountered. She traveled from hospital to hospital, location to location. She dealt with men acutely wounded being carrying in fresh from the battle field and she worked in a hospital primarily caring for men with chronic ailments.

Along the way she met some wonderful people whom she came to admire greatly -- other nurses and physicians as well as citizens of each area to which she traveled. She also met with some she did not admire. These excerpts from Kate's journal deal with exactly that situation:

July 23, 1863: We have arrived in Kingston, Georgia, last evening, and put up at one of the hotels. Dr. Avent called early this morning: he is post surgeon and highly respected for his surgical abilities.

The first information we received from him was that he did not approve of ladies in hospitals; that was nothing new from a doctor, but we were a little taken aback to hear it said so bluntly. He then told us his principal objection was, that the accommodations in hospitals were not fit for ladies. We assured him he need give himself no uneasiness on that score, as we were all good soldiers, and had been accustomed to hardships.

We were escorted to the house which we now occupy. it consists of two small rooms on the ground floor. We are about a square and a half from the dining-room and kitchen; so when Drs. Avent and Hopping called to take us to dinner, we made quite a procession. On the way, Dr. Avent informed me that he was a strict disciplinarian, and as I had charge of every thing in the domestic line, if there was not a good dinner that day, he would call me to account. I laughed and told him, if he talked in that way, I should think him a real Pharaoh, as I had not even had time to look around me.

August 1st: We have a number of patients very sick, and we are kept very busy, as the two girls we brought with us from Chattanooga are both ill, and I suppose will have to leave. Two of our cooks are also down. I asked Dr. Avent to let some of the men come and assist in the kitchen, but he refused, saying that such work was degrading to them.

August 3rd: I am beginning to think that we shall not be able to remain here, as Dr. Avent has proved himself a real Pharaoh -- expecting brick without straw. We have many sick and much to do.

We have no wash house. When I asked Dr. Avent for one, he told me that his grandmother and mother never had any but the canopy of heaven for theirs, and he did not intend having any others in the hospital. I argued the case with him as best I could, I told him that a hospital was not a private house, and it was our duty to do all in our power to promote the health of the attendants as well as the patients; and that whoever washed ought to have a covering of some kind; and the clothing, whether dirty or clean, needed to be covered in case of rain. I found him inexorable.

I have made up my mind to let things take their course, and if I find I can not get along, will leave.

This morning I sent for Dr. Avent and told him that it was impossible for us to get along without more servants; and I told him further that I knew of some who could be hired, and asked his consent; but he would not give it. So I then told him that Mrs. Williamson and myself would leave. At this he became quite angry, and said he could not compel us to remain, but since he had hired us ladies, he would pay us for the time we had been there. The latter part he said with emphasis, and then left me. Had he remained longer, I would have informed him that when we "hired" ourselves, we were not aware it was to him, but to the same government which had "hired" him.

I ask but one thing from any surgeon, and that is to be treated with the same respect due to men in their own sphere of life. I waive all claim for that due me as a lady, but think I have a right to expect the other. I scarcely think that Dr. Avent would dared to have spoken to one of his assistant surgeons as he did to me.

Well, these trials must be endured for a little while; they will soon, I trust, be over with; and then, it is for the cause we have to put up with them.

August 8th: Arrived in Chattanooga last evening, and am now at the Gilmer Hospital.

~~~~~~~~~~~
So many nurses can relate to Kate's issue with Dr. Avent. How many times has a nurse, acting as an advocate for her patient, confronted a physician? How many times have nurses sought to rewrite policies, or find better, more effective ways to care for patients?

How many times as well have nurses found that they can no longer stay in a position they have held? The reason could be myriad: because of inabilities to deal with conflicting personalities; disagreements regarding policies; or perhaps it could be as simple as they wanted to try a new type of nursing.

For whatever reason, for every nurse which has left one position to go to another, I applaud your willingness to experience something new. For every nurse who has had the courage to do as Kate did --to walk away, to leave the known and established for the unknown, I applaud your willingness to stand up for your convictions. I applaud your ability to learn a new form of nursing, to become accustomed to new surroundings. You bring to your new home of nursing the strengths and knowledge you have gained from other areas, helping your new nurse colleagues to grow by that which brought you to where you are today.


On this National Nurses' Week, I thank you all.
Posted by Frannie Davis at 4:10 PM

Email ThisBlogThis!Share to TwitterShare to FacebookShare to Pinterest
Labels: Kneeling In Blood