"Jesus and the Two Bad Guys"

The other day while our grandchildren were at our house playing, our three-year-old granddaughter Emmie had built a tower out of small rectangular blocks. Her four-year-old brother, not to be outdone, decided to build an even bigger tower.

He poised single blocks in front of his tower. "They are the people waiting to get in," he explained. Then he decided to build two smaller towers on each side. A moment later his face lit up, his eyes grew wide and he waved his hands in excitement. It was clear a brilliant inspiration had entered his mind.

"Look," he said excitedly, "it's Jesus and the two bad guys!"

Looking again at his creation, it was easy to visualize the abstract version of the cross 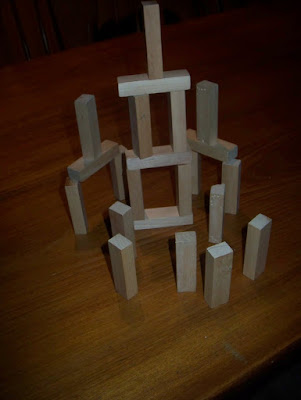 of Calvary, flanked by two lesser crosses. In front, the single rectangular blocks represented those watching at the foot of the cross.

I was amazed, not only at Jackson's inspired interpretation of his blocks, but by the sheer excitement of his realization. In the little blocks he saw the Crucifixion, something you or I might have never seen in the formation.

It was a good lesson for me. The wonders of our Lord, of His creation and indeed, as Jackson pointed out, even His crucifixion, exists all around us. Our eyes however have become dull to see these truths.

When we begin to exercise our sensibilities to see these expressions of our Lord which surround us in every moment of our lives, our vision will become clearer and clearer. More and more we will see the secrets of our Lord in whom we "live and move and have our being."

"And one cried unto another, and said, Holy, holy, holy, is the LORD of hosts: the whole earth is full of His glory. " Isaiah 6:3
Posted by Frannie Davis at 1:03 PM