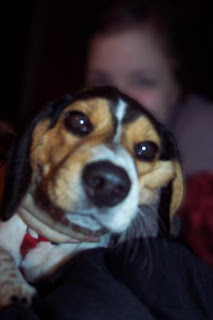 Every morning before I go to work, I can depend upon my sweet beagle Sparrow, to be waiting at my feet for me to go to the dining room.

You see, Sparrow has already been to the kitchen and knows by virtue of that amazing nose the Lord has given her, that there is an egg boiling on the stove top. She has also learned about how long it takes for the egg to cook. When she thinks it has been long enough, or that I have taken long enough in my preparations, she will come to my bedroom, sit at my feet and stare.

She doesn't bark. She doesn't whine. She doesn't whimper. She just watches. If I move to the bathroom, she moves with me. By only her gentle appearance and presence, she is letting me know that it is time to get a move on and head to that egg.

The reason she does this is because she knows the egg is really for her. In the beginning, I only gave her a little bit of the yolk. Then eventually, I gave her all of the yolk. Now, she get's just about the whole egg. (Maybe we should put two eggs in the pot from now on.)

Watching Sparrow the other day as she watched me, I thought of how the Lord moves in our lives. We often expect to see the dramatic, the sensational, the spectacular.

Do you remember when Elijah had decided he was the only believer left in the world and the Lord sent him to the Mount of Horeb? The Lord spoke to Elijah,

The Lord was in the still small voice. The meek and gentle. The quiet and small. Yes, for Elijah He used a wind and earthquake and a fire to wake him up out of his self-absorption and depression. Then the Lord gave Elijah the truth of the matter, he wasn't the only believer left in the world, "Yet I have left me seven thousand in Israel, all the knees which have not bowed unto Baal, and every mouth which hath not kissed him." I Kings 19:18. The Lord had seven-thousand more believers out there unknown to Elijah.

The point of the matter is that the Lord is in the business of revealing His truth to us, but if we are not in the business of receiving that truth we will not hear His still small voice. If we become self-absorbed, or too centered on the things happening around us, or the faults in others, we will never hear that tiny quiet sound in our spirit. Then it may be, like with Elijah, the Lord may need to use the wind and the earthquake and the fire to get our attention so we are ready to listen to the still small voice.

"My sheep hear my voice, and I know them, and they follow me: And I give unto them eternal life; and they shall never perish, neither shall any man pluck them out of my hand. " John 10: 27, 28
Posted by Frances Davis at 9:17 AM