In a recent post I told how our eight-year-old grandson, Jackson, and our seven-year-old granddaughter, Emma, were the Best Man and Maid of Honor at our son's recent wedding.

I had a conversation with both Jack and Emma about how special their jobs were and how honored they should be that they were chosen for them.  I also told them that they should take these jobs very seriously since their behavior would reflect on their Dad, step-mother and the rest of their family.

It was obvious in watching them that they took this conversation (and probably others from their Dad) very seriously indeed. 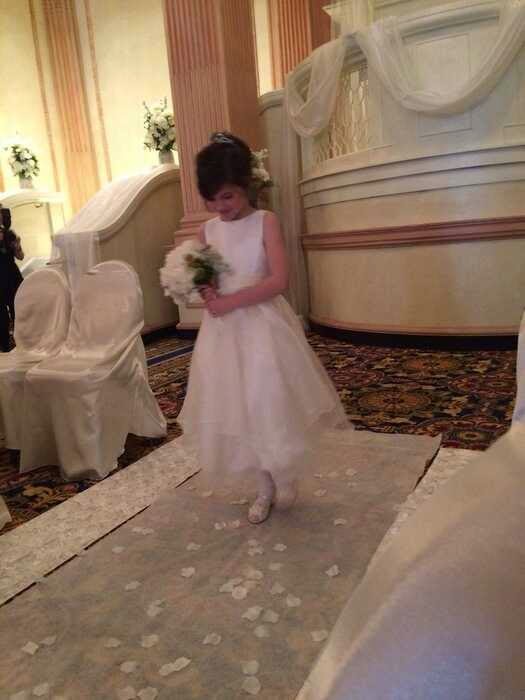 Jack walked down the aisle along side of his dad and took his place to the right of the groom.  He stood very solemnly.  He handed off the rings at the appropriate moment and the ceremony went off without a single hitch.

Emma excelled at her job as well.  She walked alone down a marble staircase -- the same one the bride would soon be walking down.  She gracefully took the turn to the aisle and walked down with more grace, poise and dignity  than many brides I have seen.

She too, stood solemnly, though usually with a grin from ear to ear, as the ceremony went on.  At the point the rings were to be exchanged, our daughter-in-law passed her bouquet to Emma, who was already holding her own, and Emma took it and held it without a single waver.

It was a beautiful moment created by four beautiful people whom I love very much. (Five if you include the Preacher, who just happens to be my husband.)

When we come to the point in our lives where we are ready to accept the Lord Jesus as our Savior, we should be just as serious about our lives as Christians as Jack and Emma were their roles in this wedding.  In fact, we should be more serious.

Our salvation is the freest gift ever given to us, although it cost the Lord a life of suffering we can't begin to imagine.  It may be free, but it isn't flippant.  If our lives are not dramatically different after coming to know the Lord, perhaps we treated the choice to accept Christ the same as the choice we make between a Coke and a Root Beer.

There were many times as a child I fell from my bed in fear of dying and going to hell and asked "Jesus to come into my heart."  What I was seeking was something to keep me from hell, not a Savior.  It was many years later I fell to my knees in humility and sorrow, this time admitting that there was nothing I could do to produce my salvation, and accepting Christ as my Savior and Lord.  Growing up with a preacher grandfather, I well knew the consequences of this choice.

When I got up off my knees, the whole world seemed different.  I was different.

When we become a Christian, we are created anew -- our  "old man," the inward part of us that the prophet Jeremiah described as "deceitful above all things, and desperately wicked:" (Jeremiah17:9), has been crucified with Christ, "that the body of sin might be destroyed, that henceforth we should not serve sin." (Romans 6:6.)

We are indwelt by the Spirit of God and the desire of our heart is not to "serve sin," but to become "servants of righteousness."  We are told that we are now "the new man, which after God is created in righteousness and true holiness." (Ephesians 4:24.)  This new man does not want to serve sin, in fact, the Apostle Paul tells us that we "delight in the law of God after the inward man." (Romans 7:22.)

Making the choice to believe these things are true of us is part of taking our salvation seriously.  We must realize that the Lord expects us to "delight in the law of God," because this is what we have be created to do.

Just as Jack and Emma stood solemnly at the altar with their Dad, we must take the choices which present us solemnly and seriously.  Our choices to delight in the law of God are some of the most important choices we make.

We must take them seriously because the Lord certainly does.
Posted by Frannie Davis at 4:30 AM