In the Activities Room where we do services at a local retirement community, there is a poster of a very famous picture.  The person in the picture is famous and the pose is famous.  You will recognize it immediately. 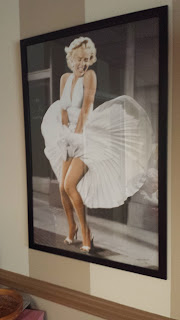 The picture is of Marilyn Monroe during the shooting of the film, "The Seven Year Itch."  The picture gives the illusion that a photographer spontaneously snapped a photograph of the famous blonde just as she stepped onto the subway grate on the corner of Lexington and Fifty-second Street in New York City.

As it turns out, however, everything about this particular famous picture is an illusion.  Nothing is actually real about it.

First of all, the snapshot was not spontaneous.  There were actually two shootings of this famous movie scene.  One was done on September 15, 1954 at 1 a.m. at the New York location.   It was well publicized ahead of time so there were many photographers and hundreds of fans present.


The film's director, Billy Wilder, took the actress through a series of warm-up poses over the subway grate before filming ever began to make sure she knew the physical aspects of the scene.

The blast from the subway was not generated by a passing train, but instead by technicians underneath directing fans toward the star's legs.  Fifteen takes of the scene were made with her dress flying in the wind of the blowing fans below.  Her dress was blown high above her waist, revealing her white underpants, which in that day was considered scandalous, and showed the public --and waiting photographers -- much more of her than they had ever seen before.

The scene was filmed again on January 9, 1955 on a set at the 20th Century Fox lot.  In this scene, and the resulting picture we see here, the actresses' dress never rises much more than above her knees.  It took over 40 takes to achieve the final scene.

The famous "white dress" we see in the picture wasn't actually white, it was ivory.  Stored away by the designer for years, the entire collection was eventually purchased by Debbie Reynolds, who said the dress had yellowed to a ecru color by the time it came to her.  When last purchased just the dress itself sold for $5.5 million dollars.

That isn't the only illusion in the picture.  Marilyn Monroe was not born a blonde.  She changed from a brunette to a blonde (I can't fault her for that) because blondes were more in demand as actresses then.

There are many things this world tries to present to us as beautiful, desirable and worthy to be had.  But when we look closely, examine them by the light of truth, we will see they are illusions.  We do well to seek for that which has been proven to be true and right and faithful, knowing they will never fade, they will never yellow with time, they will never disappoint us.  As I heard someone say one time, "Only God and people are forever, everything else is just stuff."

Matthew 6:33
"But seek ye first the kingdom of God, and his righteousness;
and all these things shall be added unto you."