Her work, His workmanship 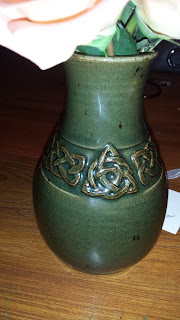 Our youngest daughter is a senior art-major at a local university.  She has just finished another semester in which she has taken ceramics  and our house is the beneficiary of her studies.  In fact, for Mother's Day, she presented me with a beautiful vase which she had made just for the occasion.

Each bowl, cup, vase and urn she has made is the work of her own two hands, the product of her own mind.  She has created the design, formed the clay, she has added the design elements and applied the glaze.  The vase of which I am now the proud owner, is her workmanship.

Of course, I am reminded of Ephesians 2:10,
"For we are his workmanship, created in Christ Jesus unto good works, which God hath before ordained that we should walk in them."

Just as the vase is the product of Emmie's work, we are the product of the work of the Lord in and through us.   The Scriptures tell us that "it is God which worketh in you both to will and to do of His good pleasure," (Philippians 2:13.)  There is not a moment in which He is not working in our lives to accomplish His will.  We are either submitting to that working or hindering it in some way.

Emmie did not give me a vase which she had not finish sculpting.  She did not give me one  she had not glazed nor  one that had not been fired in the kiln.  She took the vase through all the steps until it was completely and thoroughly finished.  I know that it was the work of her hands, because the bottom of the vase bears her distinctive stamp, her mark.

The Lord will take us through all our steps as well.  He will not leave us unfinished.  His Word promises us,  "Being confident of this very thing, that he which hath begun a good work in you will perform it until the day of Jesus Christ:" (Philipians 1:6.)  When He is finished, we will bear His distinctive stamp as well, because He is in the process of conforming us to His own dear Son. "For whom He did foreknow, He also did predestinate to be conformed to the image of His Son, that He might be the firstborn among many brethren," (Romans 8:29.)

What an incredible thought that we are His workmanship, that forever He can showcase His children as the work of His love, His grace and His mercy.

"But we all, with open face beholding as in a glass the glory of the Lord,
are changed into the same image from glory to glory,
even as by the Spirit of the Lord."