It was such an unassuming envelope, I almost tossed it aside to open it later.  Then remembering I have friends soon to be married, I suspected it to be a shower invitation and opened the envelope. Image via WikipediaAlthough the name on the top of the card was clearly recognizable, it didn't dawn on me that I held in my hand a card from the former First Lady until I had almost finished reading the card.  I suspected it to be a "form letter" type of card.  Then I read the sentence that said, "Thank Noah for his service to our country."  That could be no form letter.  It was a real letter, written by a real woman, who was married to our 43rd President.

I had written Mrs. Bush after reading her book, "Spoken From the Heart."  It was an incredible book which gave many insights not only into the Bushes themselves, but also into the events which transpired during President Bush's presidency.  In my letter I spoke of our son's deployment with the Marine Corps and how her expression of their feelings during that time and their visitations to wounded and returning troops were a comfort to me.  I never imagined receiving a response of any form, much less a personal letter.

Mrs. Bush is a busy woman.  She works toward promoting the freedom of Afghanistan women; she is active in the Alliance to Reform Education Initiative; she speaks at multiple venues supporting literacy programs and many more things which I couldn't begin to know.  Yet she took the time to pick up a pen and write me.  Me!

Needless to say, the card from Mrs. Bush will go in the same place where all my other treasured items are stored.  But my very thoughts about this situation make me think of another valuable document, written by an even more important dignitary.

I have often heard the phrase, "the Bible is God's love letter to us."  I have a book written to me by Someone who not only cares enough to pick up a pen and write a card, but cares and loves me enough to even number the very hairs of may head. (If you knew the rate at which my hairs fall out and then replace themselves, you would know this is a full-time job in and of itself!)

I have a book written to me (Me!) by the same One who holds our very universe in place by the "power of His Word."  I have a book more precious than all the volumes of all the books ever written throughout all the moments of history, because it was written for whom and by whom history revolves.

It is well and good that we should have those that we admire, especially if they prove themselves to be men and women worthy of our admiration.  Let us not ever forget, however, to look beyond those made of dust as are we, and look to the One True God.  Let us hold most dear the One who. . .


"being in the form of God, thought it not robbery to be equal with God: But made himself of no reputation, and took upon him the form of a servant, and was made in the likeness of men:  And being found in fashion as a man, he humbled himself, and became obedient unto death, even the death of the cross."
Philippians 2:6-8
UPDATE:  I have been asked to put a scanned picture of the card on this post, and I am pleased to comply. 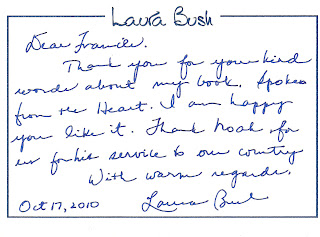