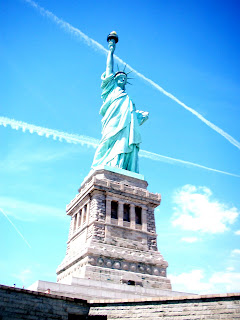 Today is the 234th birthday of our nation.

I have just finished reading "1776" by David McCullough and I am amazed at the sacrifice and suffering endured by the army of the American Revolution and that they were able to bring about a victory against the forces of the British when outnumbered and out-supplied.

Mr. McCullough concludes his book with this thought:

"The (American Revolutionary) war was a longer, far more arduous, and more painful struggle than later generations would understand or sufficiently appreciate. By the time it ended, it had taken the lives of an estimated 25,000 Americans, or roughly 1 percent of the population. In percentage of lives lost, it was the most costly war in American History, except for the Civil War."

In reading this book, I am reminded of the little-remembered fourth verse of the Star-Spangled Banner:

O, thus be it ever when freemen shall stand,
Between their loved home and the war's desolation!
Blest with victory and peace, may the heav'n-rescued land
Praise the Power that hath made and preserved us a nation!
Then conquer we must, when our cause. it is just,
And this be our motto: "In God is our trust"
And the star-spangled banner in triumph shall wave
O'er the land of the free and the home of the brave!

Happy July 4th to you all, and ever may her banner wave free.
Posted by Frances Davis at 2:20 PM