This evening was a trip unlike any other. 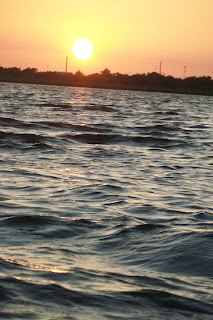 
As soon as we put in, we noticed how rough and choppy the water was. The wind was up a little and in our face, but not windy enough to account for the onslaught of wave after wave we encountered. Many of the waves even had little whitecaps. Our perfectly balanced little Wilderness Rippers handled the rough water wonderfully. Our kayaks rocked port and starboard, fore and aft and yet stayed perfectly afloat. I loved how my boat would rock and crash over the larger waves, splashing water all over my face, arms and legs. I admit, I looked to see where the highest, hardest waves were falling 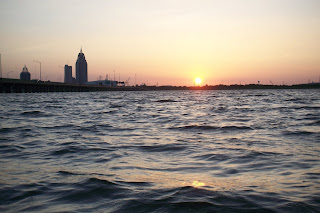 and set my sights in that direction.

We paddled north, up the river, but we both knew with the setting sun and the crashing waves, we wouldn't get too far. Still, it was one of the longest times of continuous paddling we have done. We couldn't stop concentrating for a moment, although the key was to keep our bodies loose and relax and feel as if we were a part of the boat. I felt if I let my mind drift, I would soon be drifting in that water, and I'm quite sure that wouldn't be my idea of fun -- especially getting back into the boat in those waves.

As we paddled on, the wind died down a bit and so did the waves. I felt so disappointed, as if the ride at the fair was over much sooner than I thought it should be. 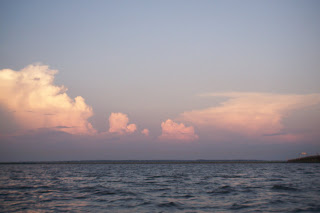 I had hoped for the return, the wind would be at our backs and we could ride some of those waves in, but as is often the case, the wind and the current had changed direction as we did. Now the waves beat directly on our starboard side and the current pulled in the opposite direction. It was strong and I found myself having to fight hard to stay on course until I could break free of that part of the current and move more to the center of the river.

When we reached the bay area where we had put-in, the water had become much calmer and the sun was just about to tip under the horizon. We were able to rest awhile on the water and watch the glory of the sunset before we pulled our boats in and loaded up the car.
Posted by Frances Davis at 8:34 PM