Photo - Beside the Still Waters 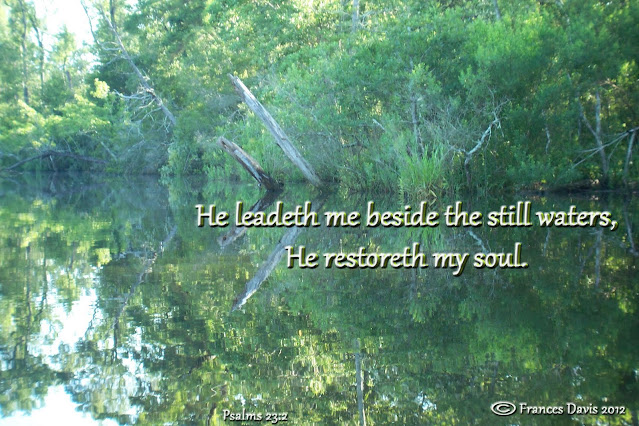 This photo was taken early in our kayaking adventures.  We weren't yet comfortable enough for large expanses of water, but sought out creeks and smaller rivers.  A friend recommended Chickasabogue Creek to us and we decided to give it a try.

It was an easy drive and there was a nice put-in for kayaks.  Glen and I and our youngest daughter, Emmie, then eleven, unpacked the kayaks.  I was very surprised at how cool the water was.  It was delightful on a humid Mobile day.  As the creek curved into the area we see in this photo, I was struck by the stillness of the water and how clearly the reflection could be seen.  My camera was always with me in those days and I quickly snapped this photo.

Taking a photo on a kayak isn't always an easy thing.  As you let go of your oars to frame the photo, the kayak begins to drift with the current, meaning whatever was nicely centered in your viewfinder is drifting as well.  Thankfully, I was able to capture the beauty of this area to serve of a reminder of that day.

I actually don't need a reminder though, because the events after the kayaking comprise a story we often regale in our family.

We had borrowed our son's truck to transport our kayaks for the trip.  Before we started we placed his keys in the hold of the kayak, thinking they would be dry there.  Apparently, we did not close the top well, because water leaked into the hold.  (Remember, we were still new to kayaking at that time.)

We didn't realize this until we were getting the kayaks out of the water and retrieving our belongings.  We secured the kayaks in the back of the truck used the fob to unlock the door.  The water in the fob set off the car alarm.  Several yards down from the put-in was a swimming and picnic area.  There were many people in the water and even more at the picnic tables and I believe everyone of them turned to look at what caused the offending noise.

We would have loved to make the noise stop, but we could not cancel the alarm.  We tried everything we could think of, but it would not stop.  We finally decided to just leave as quickly as we could with the alarm blaring.

As we were leaving, we had a choice in exits.  We had never been there before so we didn't know the one we chose would take us right into the picnic area and in front of all the swimmers.  Irritated looks met us as we passed by, our alarm sounding at its loudest.

We were  a little nervous passing the entry to the park, fearful the attendant might think we had stolen the truck, but there was no haling us down, no car in hot pursuit as we left the park.  We continued the ten miles down the interstate with the alarm still crying out, which it did until finally the battery in the fob died.

Our son was happy to find out we had ruined his alarm system, and I don't believe we ever borrowed his truck again. But now, years later, the event is something Glen and Emmie and I laugh about whenever we remember it.  The embarrassment of the moment has led to moments of shared laughter and reminiscence.

The calm quiet stillness of the photo could not predict our frantic - and loud- departure from the park, but I remember both with fondness.

Posted by Frannie Davis at 9:38 AM

Email ThisBlogThis!Share to TwitterShare to FacebookShare to Pinterest
Labels: Photographs