My husband and I went kayaking this afternoon and had one of the most difficult kayaking experiences in the ten years we have enjoyed the sport.

We usually put in on the eastern shore of the bay in our town, but today we decided to put in on the western side.  Our city is home to the USS Alabama, and we have enjoyed in the past paddling past this huge warship.

From our put in we had to paddle through a smaller bay and cross under a bridge to enter Mobile Bay proper.  Several rivers empty into this bay which eventually empties into the Gulf of Mexico. We made quick progress into the bay and alongside the battleship.  Along the way we passed many crab trap buoys (these mark the spots where the traps are underneath the water,)  and Glen commented on how still the water was, which is unusual as in the late afternoon this water is often whipped into a frenzy by the wind and very difficult to paddle against.

At one point we stopped to share some water and take in our surroundings.  Glen pointed out a fin flashing in the distance then something closer caught our eye.  At first I thought it was a snake making it's way across the water (although we have only seen one snake in our years of kayaking.)  Then we saw another.  I suggested it was just a ripple in the water until I noticed, not far from our boats, one of the orange buoys traveling at pretty rapid speed past us.

"How are they doing that?" was the question we both asked.

"Maybe someone is pulling them in," suggested Glen, as another passed us by quite quickly. I began to wonder if these buoys were high-tech (although they certainly didn't look like it) had motors and were propelling themselves through the water.

"Let's follow them and see!" was my suggestion, followed by the realization that I might not be able to paddle that fast.  But paddle we did and soon I was neck to neck with this buoy.  Then I even passed it.

Still the truth of the matter had not dawned on us.

"I don't think we are moving much," I said to Glen, which disheartened us both since we had paddled hard to "catch up" with the speeding buoy.

It was about this time the truth of the matter began to dawn on us.  Of course the buoys weren't moving, we were.  The current, strong from being drawn out to sea, had been pulling us along at a rapid pace.  That combined with the fact we had paddled hard and not moved a bit, prompted us to kick it into even higher gear and paddle with all our might.

It seemed to take forever to gain any ground, or I guess water, and eventually we had to point our bows more to the shore to be out of the direct pull of the current.  Still, the battleship seemed a long way away. 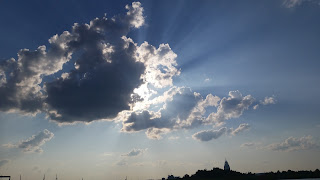 I stopped once to take a picture of the sun peaking from behind some clouds and when I turned my
kayak around I was astounded at how far I had been carried away in such a short amount of time.  As I paddled furiously back toward Glen I wondered if the picture had been worth the effort I was now having to pay for it.

Once we paddled alongside the battleship the current was a little weaker, but not much.  We wanted to stop and take a break underneath a pier, but the current was so strong we couldn't even hold onto the pilings for a break.  Surely, I thought, when we got under the bridge and back to the smaller bay, it will be better.

All the way to the bridge we paddled hard.  We paddled hard under the bridge and made the turn into the smaller bay.  My heart dropped at the sight of the choppy waves.  I knew from experience this part of the trip would be no easier.

As I pulled my paddle hard through the water,  I was thankful for each trip to the gym I had made lately. Those muscles were being testing this afternoon.  Finally, our put in was in sight and never before has one looked quite so beautiful to me.  Normally I would want to float and drift in the water for awhile, dreading coming out of the water, but not this time.  We were both spent from our outing.  I cannot remember another kayaking trip out of our fifty-six trips that I have liked less.

Talking about our experience on the way home, we both laughed at how stupid we were, thinking the buoys were moving through the water at such rapid speed.  But it never dawned on either of us that it was us doing the moving.  Our eyes told us one thing, but our heads should have told us it couldn't be true.

Much of the same happens when a Christian becomes deceived by a wrong doctrine or belief.

By definition, a person deceived does not realize they are deceived.  In their mind everything else is moving away from the truth and they themselves do not see how far and how quickly they have departed from the truth of the Word of God.  Just as we had to make some far-fetched explanations as to why those buoys were moving so fast, those mired in deception must also find ways to contort or misinterpret the Scriptures to explain how they can believe what they believe.  Some leave the Scriptures entirely and rely on the writings of humans to explain their beliefs.

"This know also, that in the last days perilous times shall come. For men shall be lovers of their own selves, covetous, boasters, proud, blasphemers, disobedient to parents, unthankful, unholy, Without natural affection, trucebreakers, false accusers, incontinent, fierce, despisers of those that are good, Traitors, heady, highminded, lovers of pleasures more than lovers of God; Having a form of godliness, but denying the power thereof: from such turn away. For of this sort are they which creep into houses, and lead captive silly women laden with sins, led away with divers lusts, Ever learning, and never able to come to the knowledge of the truth."  (2 Timothy 3:1-7.)


Let us be vigilant to know the Scriptures well enough that we can easily tell the deception from the truth.  Let us be wary of those who present something to us which cannot be easily supported by the Scriptures.  Let us find our primary teaching in the Word of God and not lean more heavily on the words of men.  Let us take heed to listen to the warnings of our Savior:

"And many false prophets shall rise, and shall deceive many.
And because iniquity shall abound, the love of many shall wax cold."  Matthew 24:11,12