It was thirty-two years ago yesterday and it was a night I don’t believe I will ever forget.  I just knew I was going to die.

Hurricane Frederic was headed our way.

We had left our tiny little apartment to stay with my husband’s aunt, uncle and his Mom, but upon calling my parents, realized they had not gone to my sister’s house as I had originally supposed.  We decided to cross town to stay with them instead.  Even though it was still early in the evening the wind was already strong and my husband could barely keep his truck on the road. Even the traffic lights were already beginning to sway in the wind.

As the night progressed and the wind increased, we listened to the forecasters on a little battery operated radio.  The well-meaning voices from the little box began to give updates to all of us listening in the dark.

“Azalea Road Middle school has been demolished,” they said.  Why, that was just down the street!

Another update: “The Howard Johnson Hotel on Highway 90 doesn’t exist anymore!”  I could almost throw a rock at that hotel!

My mind took as straight a course as the hurricane.  If those buildings didn’t exist anymore, and they were so close to where we were, surely we could not survive the night either.  The sounds from outside seemed to confirm the forecaster’s doom: the cracking of tree trunks and limbs, the sounds of winds that could only be tornadoes; breaking of the glass in the windows.  I was petrified.

Perhaps the thing that scared me the most was that my father seemed frightened, too, but not of the wind.  He was a man of the sea, water and wind did not frighten him, but fire did.  The candles we used to illuminate the house made him feel uneasy.  As a twenty-two year old, I did not understand at the time that if the house were to catch on fire, there would be no fire-fighters to come to the rescue.  We would be on our own until the storm passed.  My father paced up and down --and up and down-- the length of the house and his refusal to be still only heightened my own fear. 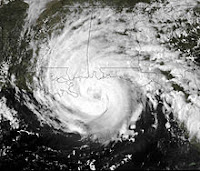 Frederic weakened slightly before it made landfall on Dauphin Island at 3:00am on September 13, with 125mph sustained winds, making it a strong Category 3 hurricane at the time.

The night passed, though, and we all lived through it. The weeping of the night was replaced with the joy of knowing that, even though there was much to be rebuilt, we were safe.

My husband and I walked the eight miles to our tiny little apartment – we walked because the windshields of our cars were cracked with rocks.  We walked because you couldn’t drive far, every road was blocked with huge oaks and tall pines, uprooted or snapped in two.   As we walked, we were amazed at the devastation which could occur in one night to our town.

The next two weeks without power seems like ages ago now.  The constant whine of the chainsaws and the endless menus of barbecue, as everyone grilled what was thawing in their freezers, is now a fading memory.

I don’t know what the purpose of that storm was, but I know the Lord had a specific purpose in it. The one thing I can be certain of is that Hurricane Frederic, in some way, even in all the destruction and fury leased upon our city, fulfilled the will of the Lord.

For many it caused them to trust Him in ways they would have never trusted Him otherwise – especially for this young girl hearing her  neighborhood was being demolished!

“Praise the LORD from the earth, ye dragons, and all deeps:
Fire and hail; snow and vapour; stormy wind fulfilling His word:”
Psalms 148:7,8
Posted by Frannie Davis at 9:58 PM