This was to be a quick, and hopefully easy, trip.

We decided at the last minute to head out, and we only had a certain amount of time before sunset.  We

Image via Wikipedia
decided to put in at Polecat Bay, because we could be in the water in the shortest amount of time if we chose that put-in.

The water was calm, the temperature was up and the air muggy.  We headed first toward Mobile Bay, but one glance past the Causeway, showed us the wind was kicking up the waves there more than we wanted to deal with.  We decided to head North and just paddle easy for a bit, turn around and come back.  That's exactly what we did, sort of.

We headed up Delvan Bay easily and gently.  There were hardly any waves and we were definitely going with the current.  We only paddled a little more than 2 1/2 miles.  Then we just sat still and rested, chatted and enjoyed the sounds of the birds and the water.  Even in that short amount of time, we were both sweating in the hot, humid weather.  I kept splashing water on myself in an attempt to keep cool. 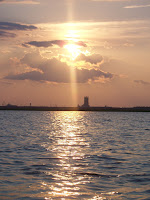 Finally, we decided to turn to go back.  All the while we had been sitting still, our backs had been to the West.  When we turned around, we were greeted with the most beautiful sunset just beginning.  We paddled a way down before I stopped to take out my camera and snap the first pictures.  Then I would paddle a bit, with my camera strap between my teeth, and then stop to take a few more pictures.

We had been expecting sunset to occur at 8:10pm, but apparently someone forgot to tell the sun, because it was looking as if it was going to set much sooner than that.  I looked ahead to see we had almost a mile to go before we reached the put-in.  I have to confess, in the back of my mind was the fact that every time we have been out this season, Glen has remarked how much slower I am this season than last.  Having had hand surgery in January is a tiny part of that.  Not returning to the gym since my surgery, however, is the big part.  I was very aware I am not as fast a kayaker as I once was, and I have never had any desire to be reaching the put-in, or loading the car in the dark. 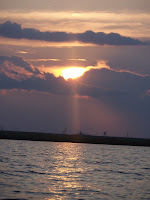 With those thoughts, I adjusted myself in my seat, braced my feet (wearing my new water-shoes which I absolutely love!) and  determined this would not be a slow trip back.  To distract myself from how much farther I had to go, I began to count.  Those of you who are familiar with my compulsive nature, will not be surprised at that.  First I counted each stroke to twenty.  Then to thirty.  To Forty.  Fifty.  Sixty.  My last count went to 130.  At that point we had crossed under the Bay-Way and were back in Polecat Bay.  We decided to stop for a few minutes to relax as now we only had yards to go to the put-in and could easily judge both the light and the distance.

As we sat in that still little body of water, with the traffic whizzing by so high above us, we felt remote and isolated from the world they represented.  Occasionally a trucker would honk his horn at us and we would wave our paddles in response, greetings linking us back to the world we would soon join once our little boats were safely stored in the back of the car and we were on our way home.

Posted by Frannie Davis at 9:20 AM