We started off heading for new waters.  We found a place we had never been, but it wasn't exactly where we were heading. 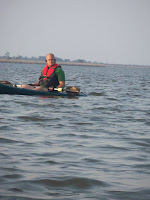 We put in about 5:45pm.  Since it is the first day of June, I shouldn't have been surprised that the water no longer held that "Oh my!" chilling surprise as it did earlier in the season.  I was not prepared to feel the water be so warm this early though, at a balmly 82°.  The wind was whipping up out of the North, causing some choppy waves in Polecat Bay where we put in.

We headed North, hoping to find the Tensaw River.  Instead we ended up in Delvan Bay.  Next time we will remember to go further east.  It didn't take long for the wind to die down to a pleasant breeze and the waves to ease out as a result.

One thing we both remarked about this evening was how peaceful and quiet it was.  "Except for the good sounds," Glen said.  It didn't take getting very far away from the Bayway and it's constant flow of cars before the traffic noises faded and all that was left were the splashing of fish and the chirping of birds.  It was the birds, in fact, that I found most memorable on this trip.

I think we were witnessing formation training.  Now, I don't know if birds really do this, but one would suppose if they are going to fly across a continent, they might practice a bit first.  The same group of birds would fly past every few minutes.  You could see the ones out in front were strong birds, but some in the  back of the formation looked a little inexperienced.  We both found it fascinating, however, to stop paddling and simply watch them form, break and then reform their formations.

At one point, with a glowing fuschia sun beginning to set behind me. the fish jumping on either side and the birds practicing formations above, I was struck by just how much I love this activity -- how much we both love it and love doing it together-- and what a gift it is to me.

The verse came to mind, "Every good gift and every perfect gift is from above, and cometh down from the Father of lights, with whom is no variableness, neither shadow of turning," (James 1:17).

It was a gift to me, not from our oldest daughter who introduced us to kayaking, although I definitely have her to thank.  It was not from my husband who decided to by the boats for us, and I really MUST thank him.

The gift was from the Lord.  It is a good gift from Him to me.  All the joy, the love, the pleasure I find in it is somehow a reflection of the joy and love and pleasure found in Him.  I sat there on my kayak, my arms and legs wet from the paddling, but my cheeks wet from my tears as this beautiful thought made its way from my mind to my heart.  What a beautiful gift from a beautiful God.
Posted by Frannie Davis at 10:33 PM