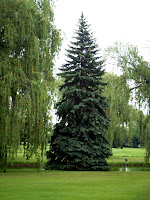 My husband and I recently traveled nearly a thousand miles from home for business to a little village outside of a major US city. It was, by my most succinct description, idyllic.

Spotlessly clean and neatly landscaped, the town seemed as if it were posing for a photo shoot. Majestic fir trees, just waiting for Christmas lights and bright shiny balls, held court on every street and thoroughfare. The crisp cool air peeled away the weight and heaviness the heat and humidity of the Deep South produces. Residents greeted us with cheerfulness, all eager to please and to help. We tasted the best pizza I have ever even thought of putting in my mouth (which should tell you where we were). I had only thought I had eaten pizza before. Then we found the most delightful German bakery whose ambiance was as delicious as the pastry. 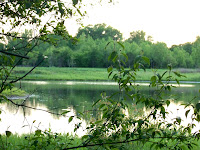 We walked along miles of forest preserve and watched deer eat, found bubbling brooks and blooming wildflowers. . .a haven of nature in the midst of a city.


When our week was up, I sincerely hated to leave. I even joked with my husband about “picking out a house”, and indeed, he had shown me a beautiful and peaceful little neighborhood just a little way from our hotel.

There was a time in eternity past when the Lord Jesus existed in the most perfect of existences with God the Father and God the Holy Spirit. They had need of nothing. They were perfectly sufficient between themselves. Yet, there was a group of small insignificant, puny humans who had chosen disobedience and would face eternal damnation without a Savior. For the people, the Lord Jesus left His idyllic existence. For the people, He willingly chose to be found in the fashion of a man. For the people, He humbled Himself and and became obedient unto death, even the death of the cross.

My husband and I will one day, I am quite sure, return to the little village we have grown to love so much. The Lord Jesus, too, has returned to Glory with His Father and the Holy Spirit, but He is forever in Heaven as a man –a glorified man. As I heard someone say recently, “The only man-made things in Heaven will be the nail prints in the hands and feet of the Lord Jesus and the spear wound in His side.” Forever He will bear in His body the wounds He received as He became man for us.

“And one shall say unto him,
What are these wounds in thine hands?
Then he shall answer, Those with which I was wounded
in the house of my friends.”
Zechariah 13:6
Posted by Frances Davis at 3:44 PM