You Must Get In The Water... 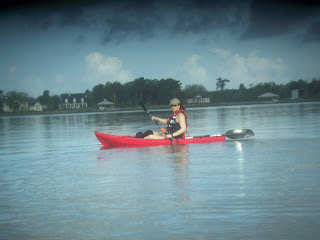 We went kayaking for the first time this season on Saturday. I was afraid the water might be too chilly since the temperature had been hovering in the 70's, and when my foot first hit the water my words were "That water's cold!" I never thought about the water being too chilly again, however. Once we paddled away from the put-in, I was so thrilled to be back in the water, and so engrossed in our trip, I never felt cold again. In fact, later in the trip the cold water actually felt refreshing.

We crossed the river, which took longer and was more difficult than I expected -- this was the biggest river we have crossed so far -- and then traveled along the shoreline exploring creeks and canals along the way. As we made our way back to the put in, the coming in was more difficult. We were traveling against the current, our arms were tired and the sun had come up considerably in the two hours since our sunrise put-in, making the temperature a good deal warmer.

At one point we stopped to rest and just let the boats drift a little. Ahead of us was a group of pelicans diving into the water for their breakfast. They would plummet into the water, their heads submerged for awhile, then resurface visibly chomping on something they had found down below. Straight ahead of me was a pole in the water with a sign attached. Perched on top of this sign were two pelicans watching their friends fishing for their meal. Finally one of the two hopped off the sign and plunged into the water. Like all the others, he was successful in obtaining his breakfast, but his friend stayed perched on the sign.

A minute or two later, a pelican flew to the sign and perched next to the one already sitting there. It was almost as if the second pelican nudged the first one and said, "Hey, Buddy, if you want some fish, you've got to get into the water!" Then he jumped off after more fish. The poky little pelican still sat there, watching his friends eat to their hearts' content. 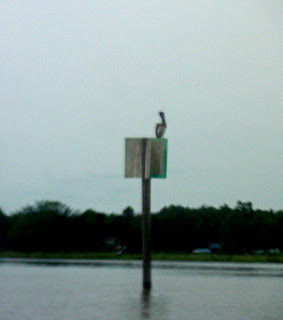 In my heart I was cheering the little guy on, "Get off the sign, go get the fish!" I didn't think he was going to do it, but finally he flew off the sign and into the water. I was so happy when I saw him chewing on his fish! Immediately, I thought that what I had seen was so much like our Christian lives. We desperately want the fish: we want to have a close walk with the Lord, we want to know His supply, His strength, His power; but to have that we have to get into the water!

I can sit on the sign and watch others, and wish that was me, or I can do what I know the Lord calls me to do and get into the water and catch some fish. After all, catfish and grits are one of my favorite things for breakfast!