Love and Joy from Fear and Terror 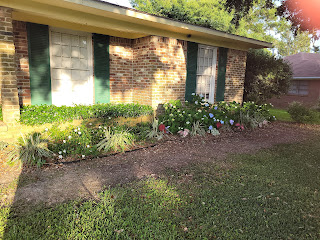 Several years ago my husband, Glen, removed some unsightly azalea bushes from in front of our house.  This started the plan for the flower beds which replaced them.  There are two flower beds, one on each side of the front of the house.  One is in full shade, one is in full, western sun.

From the very beginning I had a plan in my mind how I wanted these flower beds to look.  It was only a matter of time, money and sweat to make it a reality.  The first things we planted were five hydrangea bushes and five miniature gardenia bushes.  Then came the flax lilies and little by little our flower beds grew.

But the flower beds are not perfect yet.  Each Spring brings additions and deletions.  Plants get moved from one part of the flower bed to another.  Some plants just don't do well in that location and are replaced with something else.  The two flower beds also need two completely different types of plants.  I can't put plants that need full sun in the bed that gets only full shade.  Plants that thrive in full shade wilt quickly in the bed which receives full sun.  Yet, I want a cohesive look to both beds.  Thank the Lord the flax lilies do well in both beds and are the uniting feature.

Each Spring Glen and I have a discussion about the flower beds.  I try to explain what my goal is for that year and he will end up saying "I just can't see it."  While I know what he says is true, this sentence is so odd to me because in my mind I can clearly see the completed beds in all their detail.  Year by year I make changes to conform those flower beds to that image in my head.

This reminds me of our Lord.  He has a plan for His children's lives, a specific plan for each one of His children.  No two people have exactly the same plan.  His plan for us is ongoing, specific and detailed. He knows exactly what it will look like because His thoughts are of an "expected end."

"For I know the thoughts that I think toward you, saith the Lord, thoughts of peace and not evil,
to give you and expected end." (Jeremiah 29:11)

His plan, prepared just for us, is also perfect.  Unlike my plans --like planning to buy additional impatiens this Spring then forgetting to buy them --there are no flaws in His plan. He knows just how much sun, just how much rain we each need to make us grow and flourish in His garden and then He provides the sunshine and the rain.

Even though we are not complete yet, His plans for us are.  In His mind what He has planned, He will perform.  It is a done deal to Him.  There is not any possibility that His plans will not be completed.  Not a one.

In any moment when we are perplexed about things in our lives, confused by what is happening to and around us, let us remember we are in the midst of God's plan for our lives.  God's perfect, personal plan for us will absolutely be perfected one day.  Let us remember that, to hold it dear to our hearts.  Let us think on the thought that every second of every day the Lord is working out His plan in our lives and it will be accomplished.

"And we know that all things work together for good to them that love God, to them who are the called according to His purpose...to be conformed to the image of His Son,
that He might be the firstborn among many brethren."
Romans 8:28,29

"For it is God which worketh in you
both to will and to do of His good pleasure." (Philippians 2:13)

We can be sure of one thing, what He has planned, it will be done.

Posted by Frannie Davis at 9:38 AM No comments:

I heard of someone saying once, "God isn't doing anything in my life."

I wondered how this person could feel that way.  I knew he meant that the Lord wasn't doing anything spectacular in his life, but I pondered on how many quiet, almost secret, things the Lord does in all our lives each day.

I had several questions I wanted to ask him.

"Is your heart beating?  Did you do anything to make it beat?"

"Are you breathing without even having to think about it?"

"Are the 7 octillion (a 7 followed by 27 zeroes) atoms in your body doing whatever it is that they do without you having to lift a finger?"

"Have you eaten this week?  Did you plant the food? Did you cause it to grow?  Did you provide the sunshine it needed?"

"Are you clothed? Did you weave the fabric?  Did you cause the cotton to grow from which the fabric was woven?"

If God never does another thing noticeable in our lives (which will not happen because He is continually working out His purpose in us) we could still not say He is doing nothing because He is maintaining our lives, from our own heartbeat and breath to what we eat and wear and so much more.

"Consider the ravens; which neither have storehouse nor barn; and God feedeth them:  how much more are ye better than the fowls?" (Luke 12:24,25.)

Whenever we are tempted to believe "God is not doing anything" let us begin to count and be thankful for the many things we can't see and yet He does over and over again for us each day.  As we begin to choose thankfulness instead of despair, I am quite sure He will open our eyes to see more and more of what He is doing in and through and for us each day.

"For it is God which worketh in you both to will and to do of His good pleasure."

Posted by Frannie Davis at 12:23 PM No comments:

Thirty-six days from today I will have a major change in my life.

For the first time in 44 years, I will not be working full time.  When discussing this change with my coworkers, inevitably the question will arise, "What will you do with all your time?"  This is closely followed  by "Won't you be bored?"

I think when some people speculate about our lives in heaven, they have the same feelings as my coworkers.  They are afraid they will be bored.  I don't know where the notion of Christians floating on clouds playing harps originated, but I believe it is so false.

Our Lord is an active God, doing so many things at the same time. . .

He maintains all the vastness of creation "upholding all things by the word of His power," (Hebrews 1:3).

He is with every creature who passes, "Are not two sparrows sold for a farthing? And one of them shall not fall on the ground without your Father," (Matthew 10:29.)

He is calling all men to Himself.

He is listening and responding to the prayers of all simultaneously.

He is working out His "eternal purpose which He purposed in Christ Jesus," (Ephesians 3:11.)

I believe the activity seen in an atom only mimics the activity which occurs in the Trinity:  the Father, Son and Holy Spirit working together to maintain all things and to draw all people to Himself.

Why would such an active God lead His children to inactivity?  Pictures from satellite telescopes hurling through space reveal a universe so much greater than we ever imagined.  Each galaxy contains planets waiting to be inhabited, waiting for new expressions of His glory and majesty.  I like to think those planets are waiting for the redeemed to inhabit them.  I like to think, too, animals will live on those planets, for as I heard recently, "they are going to need critters."

The Lord will have so much for us to do, but because we will live in redeemed, perfected bodies, we will never tire, never feel weary.  Our work will be done in a sense of perfect peace and rest because our God within us is the Prince of Peace and rest.

Just as I have so many things I want to be doing in 36 days, the Lord has an eternity of things for us to do.  Mostly, we will be learning more and more of Him, His love, His character, His way.  We will never come to an end of that learning, for He is infinite, there is no shore to the ocean of who He is.  He will forever have wonderful things for us to do with Him and through Him in our eternal life, things we cannot even imagine in this life.

"Eye hath not seen, nor ear heard, neither have entered into the heart of man,

the things which God hath prepared for them that love Him."

Posted by Frannie Davis at 12:21 PM No comments: